The hairdresser helping the homeless of Malaga 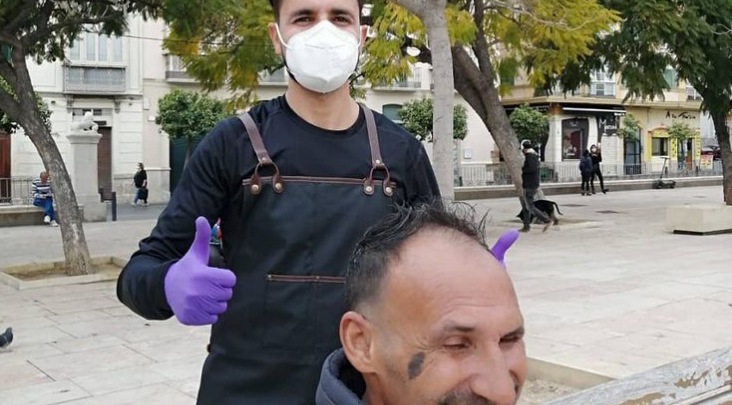 The hairdresser helping the homeless of Malaga. Image - Instagram

A hairdresser in Malaga is giving hope to the homeless with his social project.

Isaac Bousnane, 35 and originally from Morocco, has become the hairdresser of Malaga’s ‘homeless.’
First thing in the morning, Isaac prepares his backpack, in which he carries all the necessary tools to fine-tune even the most unruly beards. Thus begins his ritual and begins the journey through the parks, squares and corners in Malaga where, with great difficulty, those who have almost exhausted their hopes of escaping from the clutches of homelessness survive.
There are about 150 people in this situation in Malaga, according to estimates by the Social Rights Area of the municipal council.
It was at the end of the quarantine when he decided that he would collaborate with people who live on the street and do not have the possibility of paying for this care. At the time he lived in Marbella and this idea did not leave him after seeing the number of people in a state of abandonment.
“I want to do this my whole life,” he reveals.
“They don’t really need a haircut, what they appreciate the most is venting and having someone listen to them,” says Bousnane. As the barber explains, he always takes advantage of these talks to convey a message: “I insist that it is never too late to start over.”
That is his purpose, to help them regain the confidence to take back the reins of their lives and so that they can leave the street.
The Moroccan sees it clearly: “These people need a push, regain their self-esteem,” he says. His wish is that one of his free haircuts and beard trims will end up restoring someone the confidence they need to take back control of their life.
“There are people whom I no longer see on the street; perhaps they returned to their countries or asked for help. I want to think that they are better,” he says, aware of his optimism.
Bousnane wants the social project that he undertook alone in the middle of the pandemic to one day end up taking on greater dimensions. His objective, he says, is that more hairdressers in Malaga, and even in other cities, join this initiative, thus causing “a chain effect” to lend a hand to people who are in situations of extreme vulnerability.
Isaac usually posts some of his interventions on his Instagram account –@IsaacVantino – in which he uploads before and after photos of the haircut to those who live on the street. According to him, he has already received several messages from people who are also interested in doing their bit.