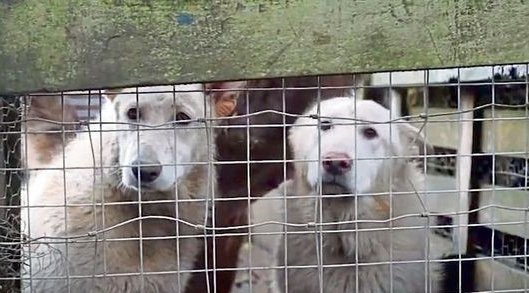 Puppy Farm: Police say a man was forced to work at a puppy farm where dogs were neglected. Image: Scottish SPCA

Demand for pets in the UK has surged during the pandemic resulting in gangs cashing in on the callous trade. In response British authorities have announced that UK cops target puppy trade in Ireland where many of the gangs behind the multi-million euro trade are believed to be based.

Traffickers, who care little for the animal’s welfare, are cashing in on the demand with some breeds fetching more than 5,000 euros per puppy. More often than not the animals are kept in squalid conditions and usually have not been vaccinated, resulting in the animal often dying shortly after being sold to unsuspecting customers.

Animal welfare organisations throughout the UK have reported a rise in calls and complaints about sick and dying puppies, since the start of the pandemic. A number of prosecutions have taken place in the UK and in Ireland, however these cases have done little to stem the trade.

Puppies brought in from Ireland are believed to be smuggled in on ferries and sold through ‘Front’ people who give customers the impression that they are buying a puppy from a family home and not a breeder.

The Irish Society for Prevention of Cruelty to Animals (ISPCA) is actively tracking bogus dog breeders and in 2021, they seized 300 dogs and puppies from illegal dog breeders and uncovered 20 black market puppy farms.

Commenting on the cases and the news that UK cops target illegal puppy trade an ISPCA spokesperson said: “These poor animals live sad and lonely lives in the most horrific conditions imaginable. They are often caged, with no room to move or escape from their own faeces and urine.Without adequate food or nourishment. Without daylight, fresh air, or exercise. Without love.”

The Society is working closely with their colleagues across the UK where the number of calls regarding puppy breeding have risen by more than 50% over the year.

In Scotland they have had some success in catching those involved a spokesperson saying: “These Irish gangs are dominating the low-welfare puppy industry in Scotland. Under no circumstances should someone meet a breeder to purchase a puppy or allow a pup to be dropped off. Do not accept any excuse, no matter how plausible it seems. These people are master manipulators and will try anything to make you believe they are legitimate and responsible breeders.”

According to the BBC who have undertaken an investigation into the trade, between 25,000 and 30,000 puppies are illegally shipped into the UK from Ireland, many going through Belfast. Their reporter Many McAuley was able to trace puppies sold in the UK back to men based in north Co Dublin and Co Galway who were involved in transporting the dogs from Ireland.

For many the news that UK cops target puppy trade will be widely welcomed, however much still needs to be done to educate buyers and to control the trade.