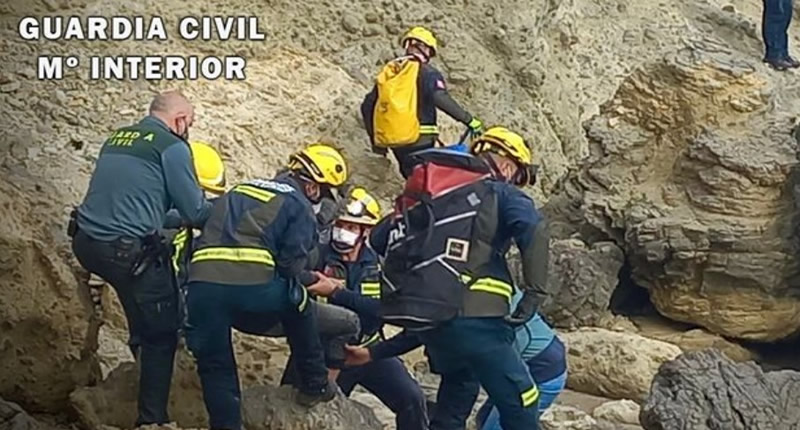 Guardia Civil officers from Almeria, in collaboration with the Local Police of Carboneras, Mojacar, and the Levante Firefighters, on Wednesday, December 22, carried out a joint rescue operation. This event occurred in the Granatilla area of ​​the municipality of Carboneras, where their team effort helped to rescue a young boy from a cliff.

The 112 emergency number reported received a call on December 22, informing them of a young boy who needed rescuing as the result of an accident in the cliff area of ​​La Granatilla, in Carboneras.

Patrols from the local Guardia Civil barracks were immediately mobilised to the location. On arrival, having prior knowledge of the area, they carried out a reconnaissance of the area, while waiting for the other emergency services to arrive.

They searched for the best route to enable locating the injured boy, in order to facilitate a successful rescue. The injured party was eventually found, about 500 metres from the Granatilla beach, in an area of ​​rocky cliffs, where access was very difficult, due to the steep slope.

Emergency crews, due to the terrain, had to make their way carefully to him. Once they reached the boy, he was immediately treated and stabilised. He had numerous lacerations on his face, injuries to the top part of his head, on his forehead, and left eye. Also, he was in a weakened state, with obvious symptoms of dehydration.

The injured boy had to be evacuated in a laborious and risky way, with his rescuers having to pass through the water, and climb a steep slope. To tackle this problem, the rescue operation was carried out in relays.

Later, the injured child was transferred to the Carboneras Health Centre, who subsequently referred him to the Torrecardenas Hospital, because of the severity of the injuries he had suffered, as reported by diariodealmeria.es.