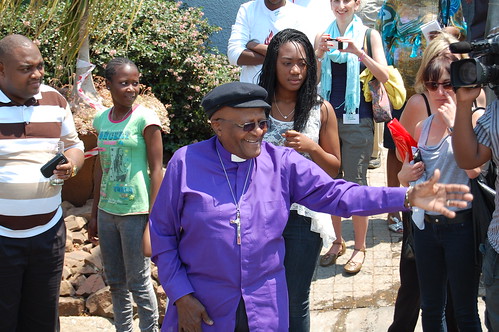 Desmond Tutu’s funeral got underway this morning, Saturday 1 January, in Cape Town, within the cathedral that the South African cleric turned into a centre of struggle against racial injustice. As rain fell down outside St George’s church, people gathered to pay tribute to the Nobel laureate.
The Rev Michael Weeder, the dean of Cape Town, welcomed those who were present and “the many multitudes who would have wanted to be with us, in all places where they have gathered”.
Weeder quoted the singer Billie Holiday, saying that Tutu’s smile had moved people “like the wind that shakes the bough”. “His smile calmed and focused those who saw it, whether in person or from afar,” Weeder said.
Justin Welby, the archbishop of Canterbury, said Tutu “lit up the world”. “The most striking common thing people have said [of Tutu] is that when they were in the dark, he brought the light, the light of Christ,” Welby said in a video message. “He never failed to bring light, and his light did not fade but grew brighter.”
Tributes have come in from around the globe after Tutu’s death was announced on Sunday and many have been deeply moved by the hero’s passing. There have been dozens of memorial services, South Africa’s cricket team wore black armbands in Tutu’s honour on day one of the first Test against India in South Africa and Cape Town’s Table Mountain was lit up in purple in Tutu’s honour.
Mourners for Desmond Tutu’s funeral within the cathedral have been restricted to a hundred due to Covid regulations. They included Tutu’s widow, Leah, and his four children, as well as South Africa’s president, Cyril Ramaphosa, who is expected to read a eulogy. The ceremony will be led by Dr Thabo Makgoba, the current archbishop of Cape Town, and a sermon given by Michael Nuttall, the former bishop of Natal who was a close friend and collaborator of Tutu.