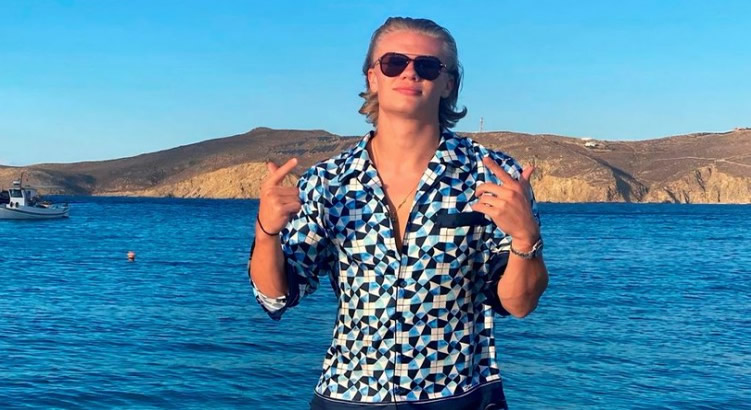 Erling Haaland tells fans in Marbella he will play in LaLiga in 2022. Image: [email protected]

Erling Haaland, the young Norwegian international footballer is one of Europe’s hottest properties, with many top clubs known to be clamouring for his signature. Currently on the books of Bundesliga club, Borrusia Dortmund, speculation is rife that he will be leaving Germany this season. They have reputedly offered their star player €30 million a year to stay.
The January transfer window opened today, Saturday, January 1, so, who knows. Meanwhile, Haaland has been spotted taking a break in the famous Malaga resort of Marbella. He often visits the popular holiday destination, and his father is apparently a huge fan of the golf courses on the Costa del Sol.
According to Spanish publication AS, when stopped on the street and asked by some fans about his future, he reportedly told them straight, “I will play here, in Spain”. Real Madrid have long been tipped as the hot favourites to be Haaland’s next club, although there is talk that Barcelona president, Joan Laporta, has already had talks with his representative, Mino Raiola.
Raiola recently revealed that his client had purchased a house in Spain, and the Norway international has made no secret of his love for Spanish football in past interviews. His current contract in Germany has a release clause of €75 million, it is believed.
With the arrival of Ralf Rangnick at Old Trafford, Manchester United are another huge club that might attract the Norwegian. Of course, there is also the blue half of Manchester, where Haaland’s father Alf-Inge spent some time as a City player before retiring from injury.
Alleged contract terms at the Bernabeu were somehow revealed last November, which stipulated two conditions for his signing. One was that he would be guaranteed a minimum of €30 million a year – to match any potential signing of Kylian Mbappe. The second was that Haaland must be guaranteed first-team football, because he would not want to sit on the bench.
German newspaper, Bild, last week reported that Dortmund officials have already sent Haaland a message that he has until the end of February to let them know what his future plans are, as reported by larazon.es.