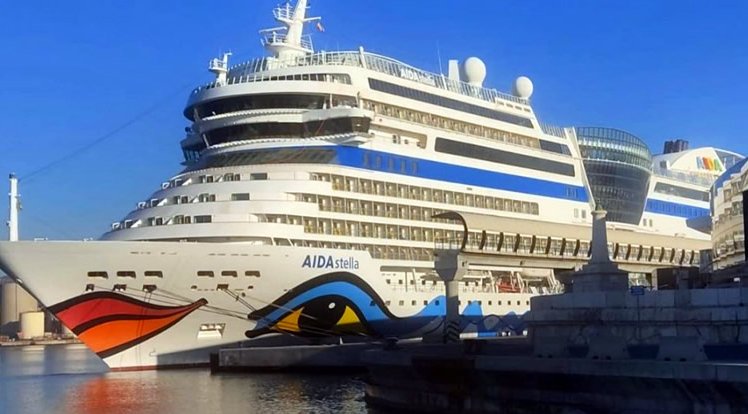 Passengers celebrate New Year on board a cruise ship in Malaga port. image: port of malaga

A cruise ship full of more than 1,000 passengers celebrated the New Year docked in the port of Malaga. The AIDAstella arrived in the Port at 8am, on the morning of Friday, December 31, and will pull its anchor up at 2am today, Saturday, January 1, to continue its itinerary.
The mainly German clientelle, after disembarking, spent the first part of the day ashore in Malaga city. An unusually long stopover saw the passengers remain overnight in the Levante dock. This is the first time that a cruise ship has ever celebrated the New Year in this fashion while in Malaga.
Their celebration will have surely included a toast with a glass of ‘sekt‘, a popular German sparkling wine, as they partied aboard the ship. From their location in the Levante dock, the passengers would have had a wonderful city view of the Park and the Alcazaba.
The AIDAstella is a 253 metre-long vessel that has docked in Malaga on many previous occasions. Built in 2013, her maiden voyage included a stop in Malaga. With 1,000 cabins and a capacity for 1,596 passengers, she is a regular visitor to the city. Since cruising opened up again in 2021, she has docked in Malaga eight times, after sailing from the port of Cadiz.
On board services include twelve bars and lounges, along with seven restaurants, a cinema, theatre, swimming pool, library, and a spa. There is even a brewery on the ship, reminiscent of those back home in Germany, where they make their own beer with seawater, as reported by laopiniondemalaga.es.