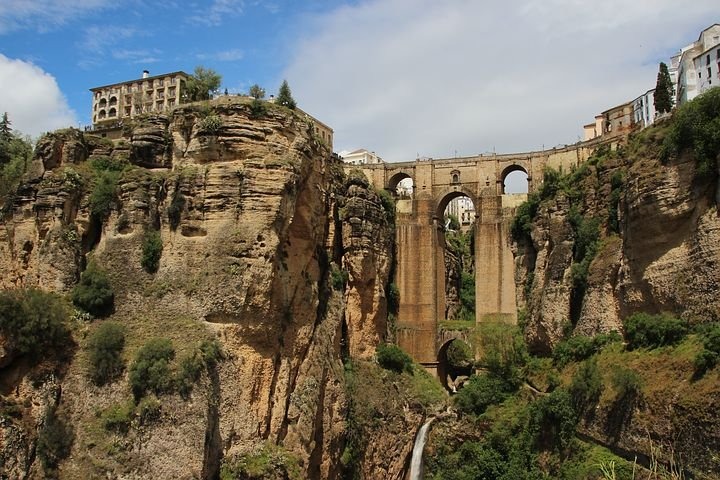 Stunning places to visit in Spain: Ronda.
Anyone looking to explore Spanish culture and history should head to Ronda in the Malaga province. Ronda belongs to the autonomous community of Andalucia in southern Spain. The town is a spectacular place for a day trip from the Costa del Sol and is only 100 kilometres away from Malaga city.
The town is located over two hills and a deep ravine called the El Tajo de Ronda runs between them and several bridges cross the ravine. Ronda is a great place to visit for both national and international tourists and it is the third most visited city in the whole of Andalucia. In Roman times the town was called Acinipo.
Probably the most famous feature in Ronda is the Puente Nuevo bridge which runs across the El Tajo Gorge.
By car it only takes around an hour and a half to reach Ronda from Malaga and Sevilla is less than two hours away.
Ronda was first declared a city during the time of Julius Caesar. At this point, it was named Acinipo. The city was later renamed as Izna-Rand-Onda – Ronda when Moorish troops invaded the region. Around 20 kilometres away from modern-day Ronda the ruins of Acinipo can be found.

Places to visit in Ronda

Ronda should be enjoyed at leisure and the city features stunning views and some excellent places to visit and eat.
When visiting Ronda make sure to head to the Puente Nuevo – the new bridge. The iconic bridge features on many postcards and it is the perfect place to take in some amazing views.
The bridge is almost 100 metres high and connects the old and new parts of the town. The bridge was completed in 1793. Many visitors each year lose their cameras in the ravine while taking in the scenery and trying to get the perfect shot.
The Ronda bullring is also a main attraction for visitors. Whether you support bullfighting or not the history is worth knowing. Ronda’s bullring is one of the oldest in Spain and it was designed by the Puente Nueve architect. The bullring can hold a staggering 5000 spectators.
Ronda is also home to a bullfighting school and a museum.
Anyone looking to relax in Ronda should head to the Arab baths. The baths can be found in the neighbourhood of San Miguel and they are extremely well preserved.
Parts of Ronda’s Arab baths are said to have been inspired by Granada’s Alhambra. The baths feature cold, warm and hot areas and were built in the late 13th century.

Other places to visit in Ronda

Visiting the Plaza del Socorro is an excellent way to end a trip to Ronda whether you spend a few days in the city or just a day. The Plaza is home to a wonderful variety of restaurants and bars which make it a perfect place to watch the world go by. The Nuestra Señora del Socorro church can also be seen from the Plaza.

Rhonda offers an excellent choice of food to visitors. The local bread with rustic pork pâté should be tried. The area is also known for excellent cheeses and churros or tejeringos as they are called locally.