Oldest person in the world celebrates her 119th birthday 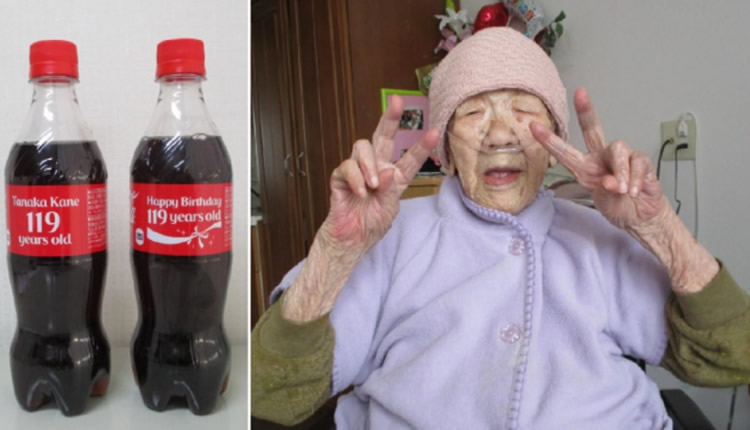 Kane Tanaka, a Japanese woman, reportedly celebrated her 119th birthday on Sunday, January 2. She is thought to have celebrated her big day in Fukuoka prefecture, at the nursing home where she lives.

A picture of two commemorative Coca-Cola bottles was posted on Twitter by Junko Tanaka, Kane’s granddaughter. These bottles were made with personalised labels for the gran, who apparently adores her fizzy drinks. The labels were printed with Kane’s name and age.
Calling her gran’s huge age “a great achievement”, Junko revealed that she hopes to live to be 120. “I hope you’ll continue to live life cheerfully and to the fullest”, Junko commented on her tweet.
In March 2019, while 116, Kane’s achievement was noted by the Guinness Book of Records. When she reached the age of 117 years and 261 days in September 2020, Kane officially became the oldest known person in the history of Japan.
As of 2020, the supercentenarian has been blessed with has five grandchildren and eight great-grandchildren. Sadly, Kane can only communicate via hand gestures, as she is no longer able to speak.
When she was aged 19, Kane got married, having grown up with eight siblings. After her husband and eldest son went to fight in the second Sino-Japanese war in 1937, she went to work in her family’s noodle shop.
Through her incredible lifespan, Kane has seen 58 different prime ministers in Japan. She survived the Spanish flu of 1918, but sadly, due to Covid visiting restrictions in Japan, she has not been able to spend much time with her family during the last couple of years.
When the Olympics were held in Japan in 2021, officials had wanted Kane to participate in the torch relay, but concerns about the spread of Covid to her nursing home companions meant she had to decline their offer, as reported by metro.co.uk.