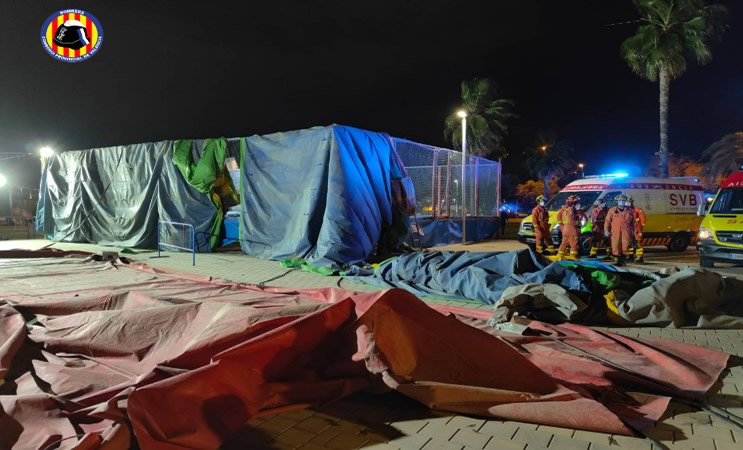 One of the injured girls dies in Mislata after flying off a bouncy castle. image; [email protected]

A bouncy castle collapsed during high winds in the Valencian town of Mislata, injuring nine children

Tragedy shook the Valencian municipality of Mislata this Tuesday, January 4. According to Las Provincias, at least nine children were injured- two seriously – when an inflatable castle overturned in the strong winds. They were all attending the town fair on the day before Three Kings’ Eve.
The incident occurred in the late afternoon with the structure collapsing under the force of strong winds. Sources from the National Police reported that at the time of the accident, three children who were playing on the inflatable were ejected. At least eight children were trapped under the collapsed tarpaulins of the attraction.
Emergency services attended the scene, with firefighters from Paterna, Torrent, and Valencia being mobilised. Local and National Police patrols were deployed, along with two SAMU ambulances, and two other basic life support (BLS) ambulances.
Four of the injured kid were transferred by ambulance to various hospitals. According to the Levante publication, another five children have been treated at the Hospital de Manises, two of whom remain under observation.
Two young girls aged four and seven, who were reportedly ejected from the bouncy castle as it collapsed, are the most seriously injured. The youngest suffered a strong blow as her head hit the ground, according to witness reports in Las Provincias.
Another two children were taken to Hospital la Fe, and Hospital Clinico de Valencia. The parents of other injured children took their children to medical facilities with their own vehicles.
Murder squad officers, accompanied by forensic officers inspected the location, and, according to local media reports, everything seems to indicate that the inflatable was poorly anchored. Weather warnings for winds as high as 80km/h had been issued for the province of Valencia, and throughout Alicante, and in Castellon on Tuesday 4, as reported by 20minutos.es.