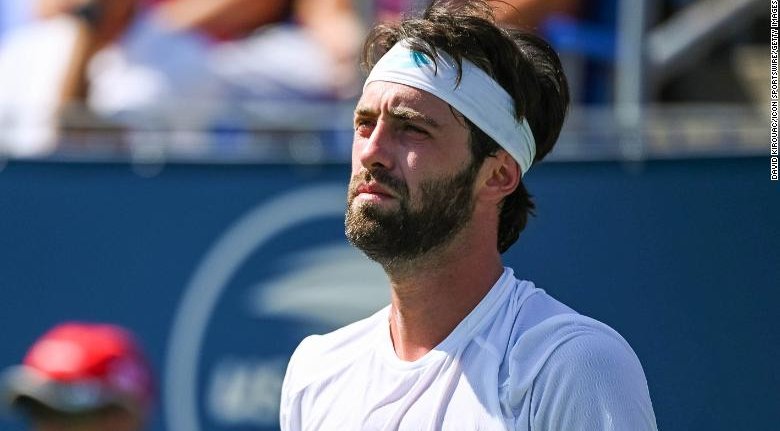 Tennis ace Nikoloz Basilashvili was forced to retire after struggling to breathe in his ATP Cup match in Sydney today, Wednesday 5 January. The Georgian needed treatment from a doctor during his singles match against Greece’s Stefanos Tsitsipas and eventually, the match was abandoned.
Play was halted when Basilashvili was serving at 4-1 down in the first set. After he hit a long forehand to go 0-30 down to his Greek opponent, he left the court slowly to head towards his team area. He tried to take some deep breaths and sip on some water while he waited for the physio to attend to him.
According to people close to the bench, hand gestures made by Basilashvili suggested he was feeling tightness in his chest. The physio then waved over a second doctor to assess the situation. The tennis ace was overheard saying: “Every shot I’m out of breath”. The situation is eerily similar to how Sports Personality of The Year Emma Raducanu had to finish her spectacular Wimbledon run last year.
They also brought to mind the scenes that occurred with Sergio Aguero while playing for Barcelona that ultimately led to his retirement. During the commentary of the match, former British tennis star Colin Fleming said: This is concerning, very concerning I would say. If you feel like you can’t take any kind of deep breath at this level and this intensity, that’s an issue.”
Basilashvili left the court with his medics while his opponent kept warm by playing rallying with a teammate. Unfortunately, when the world No22 returned, he confirmed he could no longer continue and the umpire called the game. Tsitsipas said: “It’s obviously not easy playing when you are not at 100per cent. I completely understand his situation. It’s a shame.”