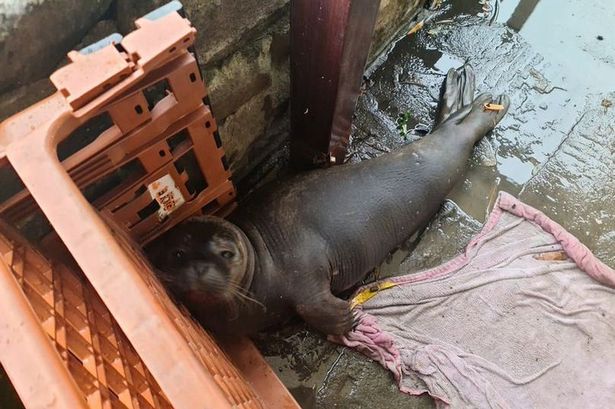 A baby seal, thought to be about six to 12 months old, has been rescued after travelling hundreds of miles from Scotland and ending up on the slipway of a riverside pub in Bristol. The pub landlord that helped in the rescue effort has joked that the young pup must have been escaping the new lockdown rules in Scotland and come down for a ‘crafty pint’.
John Jeffries, bar manager of The Old Lock and Weir, has said that his pub will adopt and sponsor the baby seal in the event that he is taken in by a wildlife sanctuary. The pup, called Neoprene, had originally been tagged in Scotland on 21 June 2020 and at 14.8kg was dangerously underweight when he was found. When he was tagged last year, he had weighed in at 30kg, almost twice as much. The Old Lock and Weir is 300 miles by road from Scotland, but the journey made by the baby seal could have been even longer depending on the route he took.
Jeffries recalled when speaking to The Mirror: “In the morning at around 11.30-ish, I was on the bar and our chef came in and said ‘we have a baby seal on the slipway’. I went to have a look and lo-and-behold there was a baby seal.
“We’re right on the river so there is a slipway outside to get boats in and out the water. He was making his way up to the gate at the top of the slipway and we contacted the RSPCA trying to get advice on what our next steps were.
“We wanted to stop him coming up to the gate because we weren’t sure if he’d fit and there is a road on the other side”.
The pub staff were advised to try and turn the baby seal around and they did, with Neoprene jumping into the water and disappearing, only to reappear later. The RSPCA asked Jeffries to try to contain Neoprene so that the British Divers Marine Life Rescue could collect the pup.
Neoprene is now being looked after at RSPCA West Hatch in Taunton, Somerset and may have to go to a wildlife sanctuary given that he is “not doing so well on his own”. However, the Old Lock and Weir team are willing to sponsor him should that happen. “He may go to Gweek Seal Sanctuary in Cornwall but we’re hoping that he doesn’t. If he does, we’re going to sponsor him as a pub. We think he may have got fed up pre-New Year’s Eve with Nicola Sturgeon’s lockdown rules and headed down for a crafty pint”.