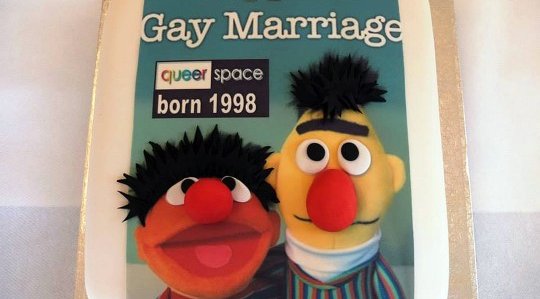 A legal case involving an LGBT campaigner and a bakery in Belfast has been stopped by Europe’s highest human rights court.

LGBT campaigner Gareth Lee, a member of the LGBT advocacy group QueerSpace, took action after a bakery in Belfast that is owned by a Christian couple refused to ice the phrase ‘Support Gay Marriage’ on a cake in 2014.
The case slowly went through court systems and has been related to broader issues around discrimination and the obligations of business owners.
After more than seven years, the case has now been ruled as “inadmissible” by the European Courts of Human Rights (ECHR).
The controversy began when Mr Lee ordered a £36.50 cake from Ashers in May 2014 for an International Day Against Homophobia event. The order had been accepted and paid for.
However, two days later, the Christian owners of the business contacted Mr Lee and said they could not proceed with his order because of the message he had asked to be iced onto the cake.
This prompted Mr Lee to launch a legal case, which was supported by Northern Ireland’s Equality Commission, alleging discrimination of his sexuality. The case won hearings at the county court and the Northern Ireland Court of Appeal in 2015 and 2016.
The owners of Ashers, Daniel and Amy McArthur, were backed by the Christian Institute in challenging the rulings at the Supreme Court and in 2018 five justices ruled unanimously that the couple had not discriminated against the customer.
Mr Lee then took the case to the ECHR, however, in a written ruling today, January 6, the ECHR said “he had failed to exhaust domestic remedies” due to arguments about the convention had not first been raised in a UK court.
A spokesperson for the Christian Institute said: “It was disappointing to see another attempt to undermine [rights to freedom of expression and religion], so it is a relief that the attempt has failed.”
They added: “I’m surprised anyone would want to overturn a ruling that protects gay business owners from being forced to promote views they don’t share, just as much as it protects Christian business owners.”
Mr Lee said he had “hoped for a different outcome,” adding “None of us should be expected to have to figure out the beliefs of a company’s owners before going into their shop or paying for their services.”
LGBTQ support group the Rainbow Project said the decision means that “uncertainty will remain” and said the decision was “disappointing.”