Astronauts carry out training in Lanzarote 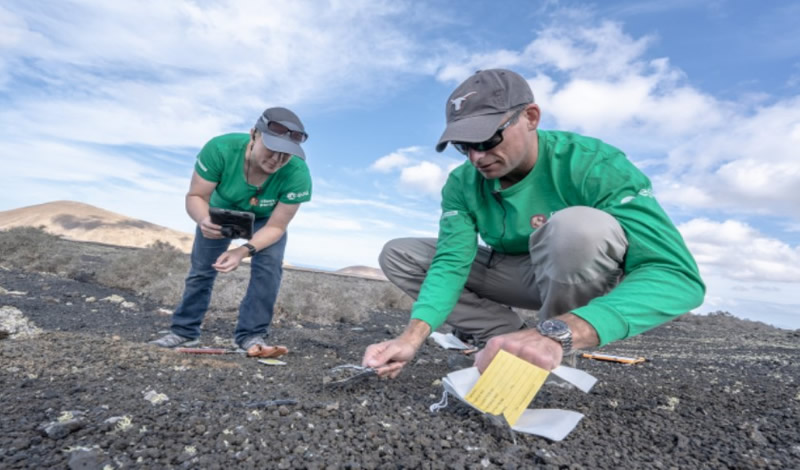 Half a century after man last set foot on the Moon, NASA is immersed in the Artemis program. This is focused on once more sending people to Earth’s satellite, including landing the first woman on the Moon, by 2024.
With their sights also on reaching Mars, astronauts continue to train. Among their training is that of the Pangea program of the European Space Agency (ESA). “It is a course to prepare them to be field geologists during the exploration of other stars: the Moon, and Mars”, explained Loredana Bessone, the director of this project
Adding, “The objective is that they can collect representative samples, and communicate effectively with scientists on Earth. They must become their eyes and their legs, since they cannot be there. In addition, they learn to read satellite images, recognise formations, and identify types of rocks”.
Pangea divides the exercise into three sessions, in different countries. The objective is to study in each of these locations a different type of geology related to that which cosmonauts can find in other stars: Martian, lunar, and meteoric.
The current training is taking place on the Canary Island of Lanzarote, with its lunar-type landscape. Astronauts Kathleen Rubins, from NASA, and the ESA’s Dane, Andreas Mogensen, are the two currently going through their paces.
Bessone is clear, “Looking at geology, you can reconstruct the history of the site, and understand what has happened. If there have been water or volcanoes, if meteorites have fallen, if the wind or water have dissolved the rocks, if others have formed. By understanding this, it is possible to trace the succession of events”.

“Lanzarote has volcanoes that are millions of years old and they are visible. There is no vegetation or very, very little, and the volcanic geology is perfectly visible, the astronauts themselves can observe it. It is fantastic. In addition, there is very little urbanisation and very well-protected national parks”.

He continued, “They are places where you can really replicate what you could see on other planets with minimal differences.  It really seems to be on the Moon, and Mars”. There, they can, “Lay the foundations so that later they can face the specific preparation for each mission. With the subsequent exercises, of a more operational nature, they will know the specific geology of the specific site they will go to”.

As Andreas Mogensen explained, “Before joining the training, I thought that analysing rocks was something quite boring. However, it is interesting to interpret the layers of the Earth from which they come and, from there, understand the evolution of our planet”.

“An arid island like Lanzarote has taught us how crucial a small amount of water can be for life”. he added.

Mogensen’s partner in Lanzarote is American astronaut and biologist Kathleen Rubins, who became the sixtieth woman to fly into space when she traveled to the International Space Station on July 6, 2016. She is now part of NASA’s Artemis program, which will put the first woman on the moon.

With Pangea, the participants have been able to access virtual reality technology to reproduce the conditions that they can find in other stars. “All astronauts are currently helping engineers develop tools. Learning what they will have to do on their travels is also very important for advising companies,” says Bessone, citing Rubins’ work to help create the launcher of Artemis’s ship, as reported by 20minutos.es.