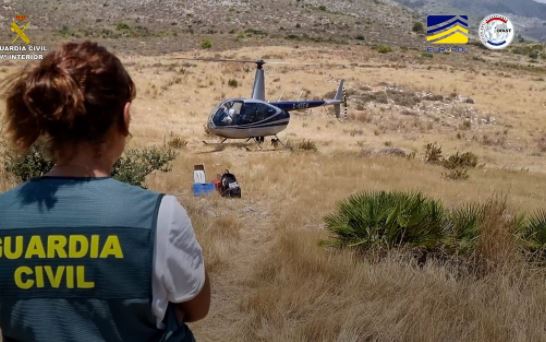 The Guardia Civil, alongside the OFAST (Office Anti-Stupefiants) of the French Police and with the coordination of Europol, has dismantled a large criminal organisation that trafficked in hashish and marijuana. They brought the narcotics into Spain by drug trafficking helicopters and four of these vehicles have been seized by the police.
The Organisation was made up of French citizens who acquired the drugs in Morroco and Andalusia and later transported it to France by hiding them among different legal loads of heavy goods vehicles. They also used the ‘Go Fast’ method, using cars with false registration plates, reports the Guardia Civil.
The operation was codenamed ‘Copa-Sucre and eleven people have been arrested in the bust, one of them by the French police. There are nine others pending arrest in France with European arrest warrants and more than 2.4 tons of hashish and 112 kilograms of marijuana have been seized.
The investigation was started in 2020 when the presence of the French organisation was detected in Southern Spain. During the course of the investigation, the use of the drug trafficking helicopters was discovered and the illegal entry without a flight plan off the Andalusian coast that came from Morroco was uncovered.
Through the monitoring of the vehicles and the identified individuals of the organisation based in Malaga province, the Guardia Civil located another member of the gang using false I.D documents. The police have said the person was using up to five different identities and all of them were false.
Once the rest of the members of the gang had been identified, seven entries and records are requested from the court in the provinces of Cadiz. Malaga, Almeria and Castellon. In the records, three helicopters (in addition to one previously seized), four firearms, abundant ammunition, bulletproof vests and numerous electronic devices that were used to avoid police action were recovered.