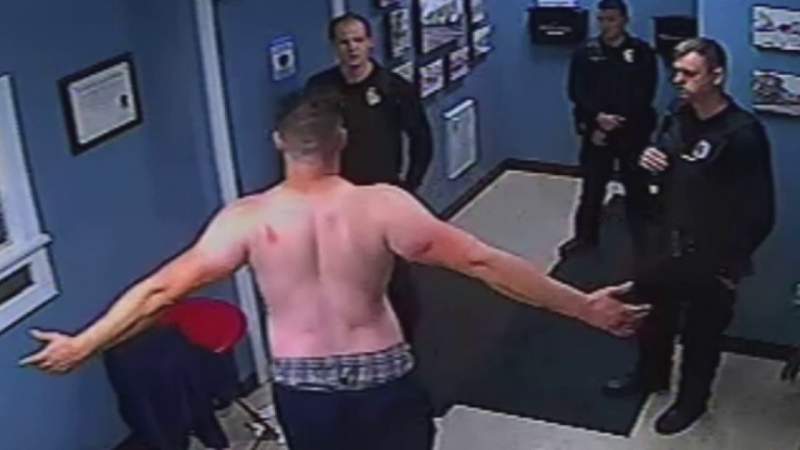 An investigation is being carried out into the death of an unarmed man who burst into flames after being electroshocked by the New York police.
The Attorney General of the state of New York is investigating the death of a 29-year-old man who died last month as a consequence of burns suffered when police officers shot him with an electroshock weapon after he had rubbed hand sanitiser gel, a flammable product, on himself.
Images from a security camera made public on Friday show how the man’s chest and head are engulfed by flames immediately after he is electroshocked by a police officer, and how the officers initially run instead of helping him.
The incident took place on October 30 at a police station in Catskill, New York.
The images have now been made public for reasons of transparency by the District Attorney General, Letitia James, who has taken on the investigation as the death is linked to a possible case of police violence.
The video shows Jones, apparently drunk and highly agitated, removing some of his clothing in the lobby of the police station and then taking a large amount of hand sanitiser gel and rubbing it over his head and body as officers ask him to calm down.
Three police officers then approach him, apparently with the intention of arresting him, and one of them shoots his electroshock weapon. The victim disappears from the frame of the image for a moment, and when he returns, he has his head and chest covered in flames.
The police officers flee quickly and only return to help him once the fire is out.
“Jason was unarmed, in the police station, and not threatening anyone when the police hit him with 50,000 volts of electrical current and he ignited,” said the attorney who is helping the victim’s family, Kevin Luibrand. “Instead of helping Jason, the police ran out the room, shut the door and let him burn,” he added.
Jones was taken to a hospital and finally died on December 15 after having spent a month and a half on a respirator.