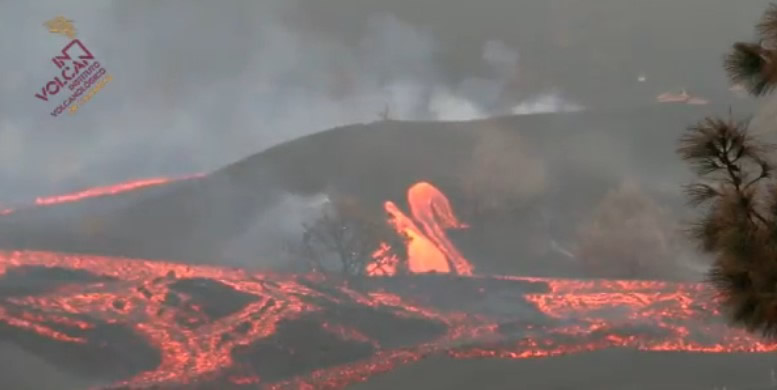 Following the end of eruptions from the Cumbre Vieja on La Palma, three destructive risks still remain on the island.

The end of the emission of pyroclasts and other volcanic products after the eruption that lasted 85 days on La Palma does not mean the end of the dangers associated with this natural phenomenon and now is when three risks remain – the emission of gases, the temperature and the stability of runoffs and hyper-concentrated flows.
The research professor of the Department of Geological Risks and Climate Change of the Geological and Mining Institute of Spain (IGME- CSIC ) Andres Diez explains that these hyper-concentrated flows are called “lahars” in volcanic areas and are made up of water highly loaded with ash and pyroclastic deposits of the volcano.
When it rains a lot the ash is mobilised, forming mudflows that are channelled through the ravines and can reach nearby towns with destructive power, as happened with the Nevado de Ruiz volcano in Colombia in 1985.
It is a frequent risk in areas with high volcanoes of more than 3,000 or 4,000 metres as in the Andes and the Kamchatka peninsula in Russia, and on whose summits snow or ice glaciers are deposited and after an eruption the remaining heat melts and gives rise to these hyper-concentrated ash flows.
Although the still-unnamed volcano of Cumbre Vieja does not reach this height and there is no snow or ice at its top, there are three factors that can give rise to these lahars and, in fact, it is documented that in the San Juan eruption in 1949 they formed two in the Las Manchas area, says Andres Diez.
The first factor that comes together is the amount of ash that has accumulated in an “especially productive” eruption and IGME researchers have measured a thickness of more than two metres outside the cone in areas such as the Camino de Cabeza de Vaca and the upper part of Las Manchas.
It is ash that has recently fallen and it is loose, not compacted and is quite unstable, says the researcher.
The second factor that contributes to this risk is the enormous slopes of the area, since this volcano has emerged practically on the Cumbre Vieja ridge, with hills of about 1,800-1,900 metres of altitude and a few kilometres from the sea with a very steep slope in a short distance.
And the last and most important factor is the torrential nature of the rains on La Palma, with highly concentrated rainfall in time and space, continues Diez, who cites as an example that 80 per cent of the rain that falls on the island it occurs in the fourth part of the days that it rains.
In addition, 50 per cent of the rain episodes are concentrated in a single day and in 45 per cent of the rainiest days, more than 200 litres per square metre were registered.
If the three factors are combined, there is a risk of lahars in the basins immediately to the north and south of the streams, this is in the Tenisca ravines in Los Llanos de Aridane and Las Palomas in El Paso in the northern area. In the southern one, in the Tamanca ravine, which passes through Jedey and the La Palma and Los Hombres ravines which flow into Puerto Naos.
All of them have their head in the ridge where a lot of ash has accumulated and where concentrated torrential rains have been registered that could now mobilise a significant flow of mud that can cause problems on roads and in towns.
For this reason, the IGME has undertaken a comprehensive study on this risk that has begun with the analysis of the rainfall regime on the island, for which it has requested all the data from the meteorological stations from the State Meteorological Agency (Aemet).