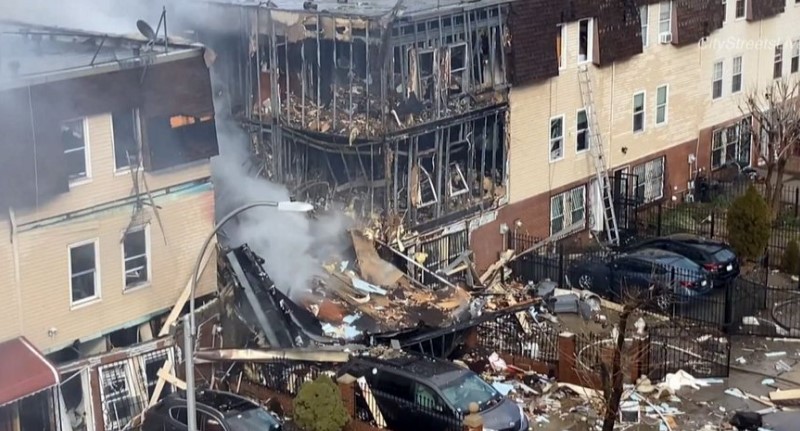 A huge explosion in New York’s Bronx district this morning, Tuesday, January 18, has destroyed a three-story home. One person is reported to have been killed, according to New York 1 News, and at least seven more injured. The injured include three police officers.
Unconfirmed reports point to the cause being a gas explosion in the home, located on Intervale Avenue in the Longwood section of the Bronx neighbourhood. Officials told dailymail.co.uk that emergency services were mobilised to the location at around 11am.
In a desperate attempt to prevent the building from collapsing, more than 100 firefighters and EMS personnel were deployed, and tackled the blaze that followed the explosion. Five NYPD officers are reported to have received treatment for the effects of smoke inhalation.
The New York Police Department confirmed that an 82-year-old woman had been transferred to the Lincoln Hospital, where she was later pronounced dead. Two others were apparently taken to the same hospital, according to New York 1. They are a 77-year-old who is believed to be in a serious condition, plus a 68-year-old female who was admitted suffered from smoke inhalation.

Fox 5 News reported that streets in the vicinity had been cordoned off, with the sky still full of smoke this afternoon. Rafael Salamanca, a local city councillor attended the scene, and posted on Twitter his suggestion that a gas explosion had started the huge blaze.

There has been no indication that the explosion was the result of criminal activity, and NYPD investigators are on the scene trying to establish the cause.

⚠️🇺🇸#URGENT: Several injured following suspected gas explosion at apartment in New York City#Bronx l #NY
Specialized units have responded to reports of large explosions and a fire. At least seven are injured, including multiple police officers.
This is a developing incident. pic.twitter.com/LlRwBBUdn0