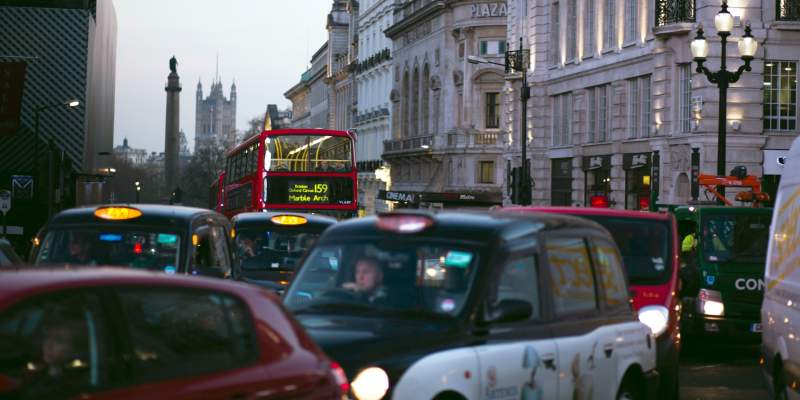 London, has announced that that new policies are under consideration that it is hoped will reduce traffic the city by 27%, one of these being to charge drivers on a pay per mile basis.
The announcement by Sadiq Khan, the Mayor of London, follows the receipt of a new net-zero 2030 report, which outlines the action needed to reduce air pollution, tackle climate change and cut congestion.  The report shows that more action will be required, particularly in reducing vehicle use in London
Khan has described the report “as a stark wake  up-call” if the city is to have any hope of meeting its 2030 net zero target.
The city achieved a lot between 2000 and 2018, with a 57 per cent reduction in workplace greenhouse gas emissions, and a 40 per cent reduction in emissions from homes. But transport emissions remain a problem with just a 7 per cent reduction during the same period.
With just two per cent of vehicles on London’s roads electric, the city will have to do much more to encourage people to walk, cycle, use public transport and to move away from combustion engine vehicles.
Khan thinks London needs a new kind of road user charging system, one that would replace the Congestion Charge and ULEZ (Ultra Low Emission Zone) with a scheme where drivers pay per mile. Such a scheme would see driver’s pay at different rates depending on the type of vehicle and the availability of public transport.
The whole idea is subject to consultation, but would in all probability include exemptions and discounts for those on low incomes and with disabilities, as well as consideration around support for charities and small businesses.
In the short term he is looking to expand the ULEZ beyond the north and south circular to cover the whole of Greater London. He also wants to introduce a clean air charge, a daily fee across all of Greater London for all but the cleanest vehicles.
The Mayor of London, Sadiq Khan, said: “It’s clear the scale of the challenge means we can’t do everything alone.
“But I’m not willing to stand by and wait when there’s more we can do in London that could make a big difference. We simply don’t have time to waste.”
Zack Polanski, the Green Party group spokesperson for the Environment says he believes it is a shame it has taken a funding and climate crisis hitting London at the same time to make this step change in policy happen, but welcomes the proposals.
He said: “This new set of policies comes not a moment too soon.
Usage schemes like the ‘charge drivers per mile travelled’ proposal floated by the mayor of London are not new, with the technology already in use elsewhere. Perhaps what has not been discussed or considered in any great detail is what the direct cost might be to the city for the technology that will be needed.