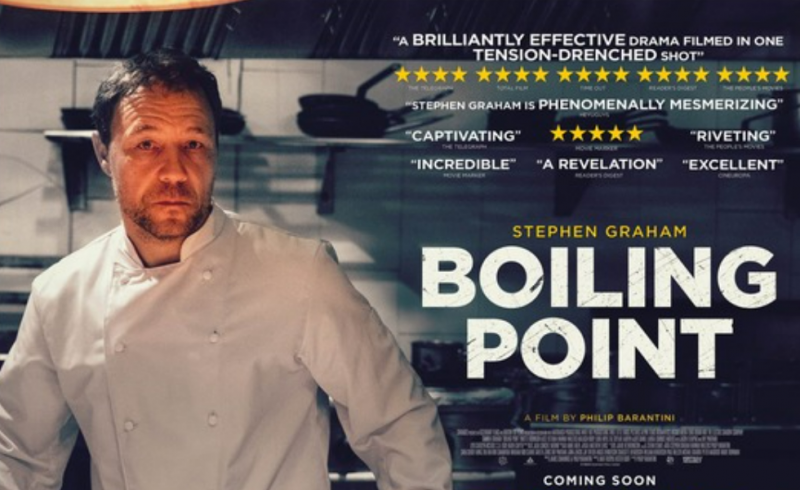 Stephen Graham plays a commanding head chef going through personal and professional crises as he tries to keep it together in Boiling Point.

Stephen Graham (This is England) plays charismatic head chef Andy Jones at one of the most sought after restaurants in London in this gripping drama. With a 98 per cent critic rating and a 79 per cent audience rating on Rotten Tomatoes, this home-grown one-shot drama is a definite must-see.

Everything seems to be going wrong on the busiest night of the year in the run-up to Christmas – a disastrous health and safety visit, double bookings, a celebrity guest and drug and alcohol abuse threaten to destroy everything Andy Jones has worked for.

Graham’s acting is, as always, incredible. From the very beginning, there is an ominous feeling that the night won’t go well for Andy as he appears to be pushed and pulled from all angles. The tense energy can be felt in the restaurant from the beginning as they prepare for one of their busiest nights contending with Andy forgetting to complete the food and drinks order the night before. Add to the pot Andy’s former boss turned celebrity chef who is less than impressed and the stew is about to boil over.

The audience is really transported into the stressful and intense kitchen, feeling like you are really in there with the staff with close-up over the shoulder camera shots drawing us into the narrative. The audience is immersed in the dizzying action of the kitchen where staff are juggling professional and personal issues.

This film really keeps you gripped from the start, capturing the sweat and tears that goes into running a kitchen and the dynamics between the front of house staff and the chefs running the show behind the scenes. Things come to a head when one of the chefs make a mistake with a food order that results in emergency services needing to be called causing staff to turn on each other during service – will the fancy restaurant’s facade fall down?