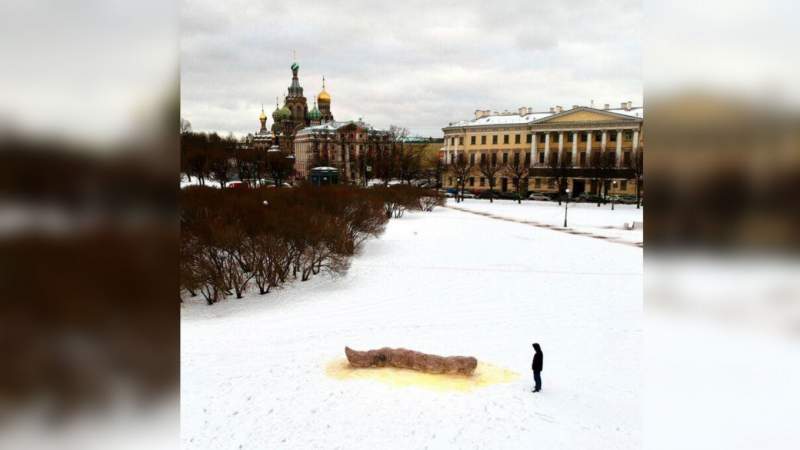 After images of a giant turd started to circulate in a central St. Petersburg park, authorities investigated resulting in the arrest of a Russian sculptor.
Local authorities told Podyom news that they had removed the five-meter sculpture by Saturday, attaching a photo of the discoloured figure with a snow head on one end. According to the news outlet it resembled a caterpillar, however social media had a different take on the piece of artwork.
In a since deleted Facebook message, Ivan Volkov suggested: “It’s so beautiful that I pooped myself,” according to St. Petersburg’s Bumaga news website.
Volkov, 29, has since been arrested on charges of desecrating a burial ground, for which he faces between three months and five years in prison. The police file according to Fontanka news cites the artist for: “deliberately, cynically and immorally” placing “an art object made of snow in the form of giant faeces in a yellow puddle.”
Volkov, according to his mother, has taken part in group exhibitions in Moscow, New York and Berlin. A graduate of Moscow’s Institute of Contemporary Art and the Stroganoff Academy of Design and Applied Arts, Volkov’s social media pages are full of sculptures covered in snow. State media has in the past featured his giant snow artworks, which have included tributes to delivery workers and public health officials battling the coronavirus pandemic.
It is understood that Volkov has been released pending his court date.
No matter what the motivation, Volkov appears to have angered the authorities which has resulted in the arrest of the sculptor, but the giant turd has also provide some well needed amusement for people locally and across the world.