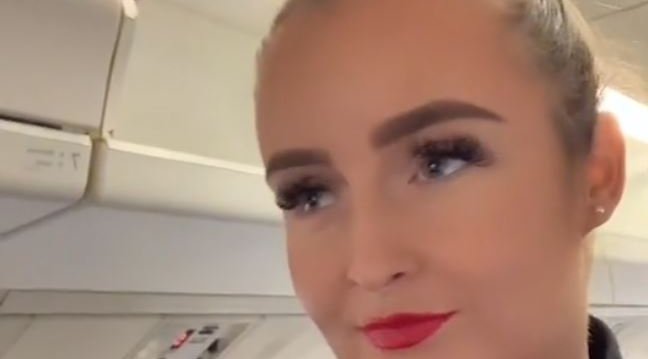 A former Ryanair flight attendant has revealed the most stupid question that she has ever been asked while in the air.
Flight attendants put up with all sorts of behaviour and strange questions. One former Ryanair flight attendant revealed the most bizarre question that has ever been put to her.
Jemma Behan took to TikTok to share a video where she explained what had happened on the flight. She had been working when she was pulled to one side by a woman who wanted to ask a question.
Jemma will never be able to forget this one particular passenger so her TikTok video played with the song ‘Never Forget You’ in the background.
The woman asked Jemma: “Can you move me away from those bottles?”
The former flight attendant was confused but quickly replied: “It’s okay miss, they are only oxygen bottles.”
The woman’s request became all the more bizarre after she replied: “I’m allergic to oxygen.”
The passenger will never be forgotten by Jemma who captioned her video with crying face emojis. The viral video has already been watched over a hundred thousand times.
One viewer commented: “People are crazy aren’t they.”
Flight attendants have to put up with strange questions from passengers on a daily basis. Another Ryanair member of staff revealed how she is repeatedly asked by passengers if they can be upgraded to first class.
Anyone who has flown with Ryanair will know that they do not have a first class section. Whenever the flight attendant is asked about an upgrade she simply comments: “But it’s all first class!”