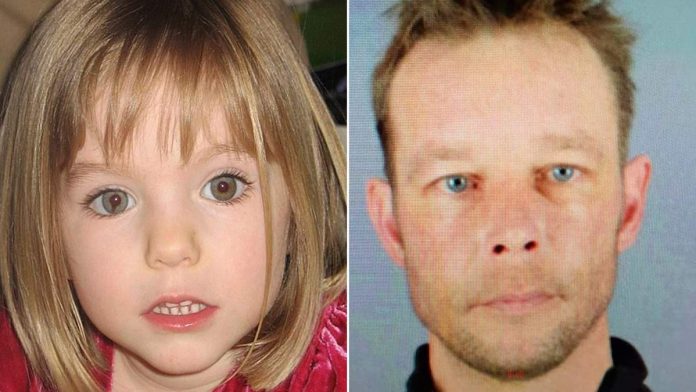 A team of ex-investigators and journalists working on a documentary for Sat.1 about the disappearance in 2007 of Madeleine McCann, claims to have unearthed what they describe as ‘shocking’ new evidence.
This evidence relates to Christian Brueckner, the convicted German paedophile who is currently serving time in Germany on unrelated offences. Prosecutors in Germany believe that Christian B is the chief suspect, and that he kidnapped and killed the young girl. Despite their claims, made in June 2020, Brueckner has never been charged, and has always refuted the accusations.
Maddie went missing from a holiday apartment in the resort of Praia da Luz on Portugal’s Algarve, while her parents were enjoying tapas in a restaurant with friends, just a short distance away.
The documentary team says that they have found fresh evidence, and that it has been handed over to detectives. They claim to have “many new clues and indications” that will prove that Christian B was in the vicinity of Praia da Luz on the night of the disappearance.
Juliane Ebling, the team’s editor-in-chief said, “The sad story of Madeleine McCann is a story that has many German facets. The case is being tried at the Regional Court of Braunschweig, as the German Christian B. is the main suspect”.
“In his environment, there are many German women and men who can describe individual details surrounding the crime”, she added. “Jutta Rabe has researched shocking material in Germany, Portugal, and England over the past months, which heavily incriminates Christian B”.
Christian B is in a German prison serving seven years, after being convicted of raping a 72-year-old American woman in the Algarve in 2005. There are also three other offences still being investigated. One of these is the suspected rape, in 2004, of Hazel Behan, an Irish tour guide, in the Algarve resort of Praia da Rocha.
He is also thought to have been involved in sexually assaulting a 10-year-old girl, again in Portugal, in 2007. A third offence, in 2017, relates to a festival in São Bartolomeu de Messines, where four children were abused, as reported by thesun.co.uk.