From the stands: Elche vs Real Madrid in the Copa del Rey

From the stands: Elche vs Real Madrid in the Copa del Rey.

FROM the stands of the Estadio Manuel Martinez Valero, I enjoyed my first taste of live Spanish football as Elche faced off against LaLiga leaders Real Madrid for a chance to play in the Copa del Rey quarter-finals. Videos at the bottom of the article. 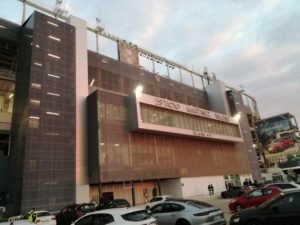 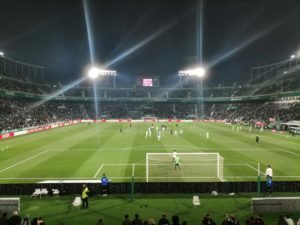 The atmosphere was buzzing outside the stadium and there was a good contingent of English fans in attendance eager to see a cup upset.
Before kick-off, fans and players stood to pay their respects for Real Madrid legend Paco Gento, who passed away on Tuesday, January 18. Then the whistle blew and the game was on.


Real Madrid, playing in blue, started without some of their big names but with Vinicius Junior playing, Elche had to be switched on.
And it was Elche that had the first chance of the game in the 11th minute and what a glorious chance it was. Guido Carrilo somehow managed to put the ball over the bar from two yards out following a low cross from Josan.
Minutes later Real had their first good chance of the game but 19-year-old Eduardo Camavinga sliced it high and wide.
Vinicius, who was going to ground too easily, much to the chagrin of the Elche fans, was lively whenever he got the ball. However, the home side were holding their own against the Supercopa winners.
Real had to wait until the 20th-minute to register their first shot on target but Toni Kroos’ effort rolled straight into Werner’s arms.
Then in the 25th minute, it was Elche who had another chance to open the scoring, again through Carrillo. This time the 30-year-old managed to hit the target with his effort but his header was brilliantly saved by Andriy Lunin.
Real were struggling to break down a stubborn Elche defence but continued to press down the left wing with Vinicius, however, he and Marcelo were failing to beat the first man on their crosses.
But Real nearly broke the deadlock in the 37th minute, when a counterattack following a penalty shout from Elche left Vinicius baring down on goal, but the 21-year-old blazed his shot over the bar.
That was Real Madrid’s best chance up until that point, but minutes later they nearly opened the scoring when Marcelo was finally able to jink his way down the left and nutmeg Josan and provide a great ball to Rodrygo who shot badly wide.
Half time 0-0. Elche had some good chances but Madrid were becoming more and more dangerous as the half went on. Enterprising play from Marcelo and Vinicius kept Elche on their toes.
The atmosphere was great throughout the first half despite the lack of real action and the stadium played some awesome music before the second half got underway.
Real Madrid started brightly and could have scored in the 47th minute before Elche found themselves in a promising position minutes later, but the advantage was blown by a sloppy through ball.
A huge cheer rang around the stadium when the attendance was announced – 23,500 fans turning out on a cold Thursday (January 20) night.
The game hit a lull around the 60th-minute mark after an Elche player went down. The home crowd did their best to liven things up and they were nearly rewarded when Elche got a free kick on the right of the Real Madrid box, however, the chance was totally wasted.
Luca Modric was thrown into action in the 71st minute as Carlo Ancelotti looked to spark some life into his side.
And it was Real that had the next big chance in the 82nd minute through their main threat Vinicius, but after combining excellently with his countryman Marcelo, the Brazilian managed to fire straight at the goalkeeper when he had the entire goal to aim at.
The game suddenly sprang into life as the clock ticked down and extra time loomed. Both teams were stringing counterattacks but failed to create clear-cut opportunities to clinch victory in normal time. Full time 0-0.

Up in the stands, the home fans tried to spur on their side, never losing their voices but it was one young Real Madrid fan who could be heard the loudest.
The young girl screaming for Madrid at the top of her lungs drew kind-hearted laughter from the Elche faithful.
But her encouragement seemed to be heard as Real looked sharp after the whistle.
However, it was Elche who had the first chance in extra time. A freekick in the 93rd minute on the edge of the Real Madrid box forced Lunin into a brilliant save.
Then a pivotal moment in the game.
In the 102nd minute, Elche played their way through the midfield and Tete Morente found himself through on goal, but before he could make it into the penalty area he was brought down by Marcelo, who received a straight red card as he was the last man. 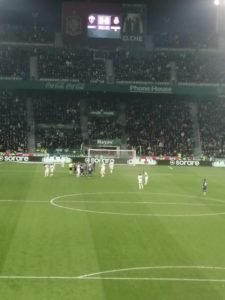 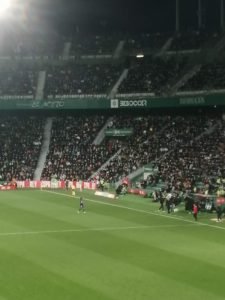 And then from the resulting freekick, which was a poor one, Elche managed to take a surprising lead through Verdu, whose shot took a slight deflection on its way past Lunin.
Half-time in extra time. Elche 1 – 0 Real Madrid. Great half for Elche, who looked dangerous before the red card for Marcelo and subsequent goal, which sent the home crowd into a frenzy.
The atmosphere was electric for the start of the second half of extra time.
But it soon went quiet when in the 107th minute, Isco levelled things for Real Madrid level through a deflected shot as the home side appealed for offside.
With that, Real Madrid suddenly came to life and caught Elche sleeping.
The home side looked tired with players going down with cramp and it was no surprise when in the 115th minute, Hazard latched onto a brilliant pass from Alaba before rounding the goalkeeper and finishing with ease.
The Elche fans began funnelling out of the stadium but those of us who were left knew that Elche had one last chance in them and we were proved right as Fidel converted from Morente’s cross sparking scenes of jubilation from the home fans.
However, celebrations were short-lived as the goal was ruled out for a foul on Lucas Vazquez in the build-up, much to the anger of both fans and players.
And that was it. 2-1 to Real Madrid in extra time.
A game that looked like it was going to be won by Elche until the setback sparked life into Real before a late equaliser was ruled out to take the game to penalties. High drama at the end but Elche fans know that this was an opportunity wasted and Real fans can be thankful to leave with a victory.
The two teams immediately meet each other again this Sunday (January 23) when they square off in LaLiga.
Overall, it was a wonderful experience. From the great atmosphere throughout to the end of game drama, it was well worth the €65 and I will certainly be visiting the Estadio Manuel Martinez Valero again in the future.