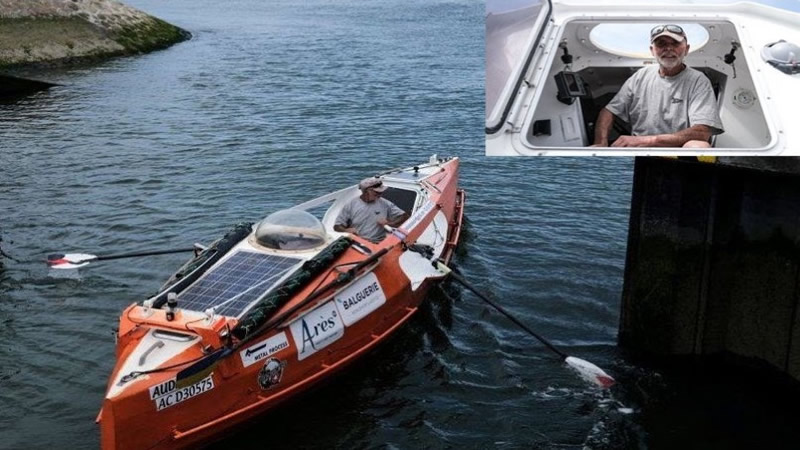 An attempt to row across the Atlantic Ocean single-handedly, by the intrepid 75-year old French adventurer Jean-Jacques Savin, tragically ended on Saturday, January 22. The former paratrooper was found dead in his capsized boat, by Portuguese maritime officials.
His support team confirmed the terrible news on his Facebook page, posting, “Unfortunately, this time the ocean was stronger than our friend, who loved sailing and the sea so much”.
Savin had apparently sent out distress signals in the hours between Thursday 20, and Friday 21. His overturned eight-metre-long rowing boat was discovered off the coast of the Azores, in the North Atlantic, on Friday 21, by members of a Portuguese maritime search vessel.
On Saturday, they sent divers down to check, and Savin’s body was discovered “lifeless inside the cabin”. No information has yet been released about his cause of death, or the circumstances surrounding his boat capsizing.
Last Wednesday 19, he had posted on Facebook informing that he was struggling with strong winds, and was having problems with his solar power. “It’s costing me physical energy,” he wrote, while also assuring that he was “not in danger!”
Savin’s daughter posted on Facebook last Saturday 21, explaining that when the distress signals from her father were received, processes were “immediately implemented in coordination with the French, Portuguese and American sea relief services. Adding, “Of course we are very worried”.
He had set out from the southern tip of Portugal on January 1, hoping to reach the Caribbean. Previously, the incredible adventurer – a keen triathlete – had completed a 2,800 miles (4,500km) journey, floating only by means of the tides, across the Atlantic, in a specially-modified orange barrel, as reported by news.sky.com.