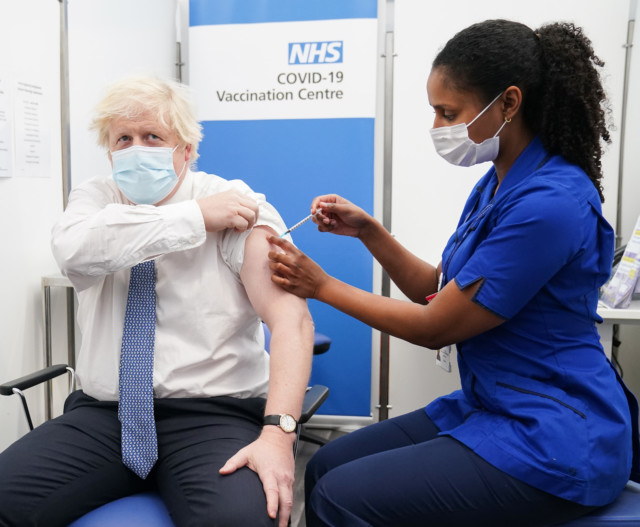 Boris booster: PM gets his COVID jab ahead of Christmas holidays. Credit: YouTube

The National Police has arrested five members of an itinerant criminal group of bank robbers who specialised in using firearms to intimidate, and had carried out heists in various communities, including Malaga.
As reported by the National Police, the modus operandi used by those arrested – of Italian origin – was to constantly change their address and location, evidencing great geographical mobility along the Catalan coast, Alicante, Murcia, and Malaga,
Investigators managed to clarify two robberies, committed in the months of September, and October, in banking facilities in Alicante, and Murcia. In addition, the police have carried out three searches in Barcelona, ​​Orihuela in Alicante, and Marbella in Malaga province.
During these searches, numerous clothes and other elements used in the execution of the robberies have been found, as well as €49,000 in cash, distributed in €50 and €100 notes.
Officers began their investigation last October, when they learned of a robbery that took place at a bank in Murcia. In this heist, the authors immobilised the employees and customers who were inside with cable ties, and stole €344,335.
After the first investigations, they realised that this event could be related to another that had occurred a month earlier, also in a bank branch in Alicante, in which two individuals intimidated those present with pistols.
Finally, the investigators had sufficient evidence to link both robberies, determining that the perpetrators belonged to a criminal group of Italian origin, specifically from the city of Naples.
The alleged gang members showed a high standard of living, which could not be justified with any work activity. Surveillance revealed numerous trips, attendance at restaurants, car rental, and hotel accommodation in various Spanish cities.
All five detainees have a history of robberies, and other crimes against property in Spain, Italy, and Belgium. In addition, one of them had been sentenced by the Italian justice to 14 years in prison, in relation to crimes of robbery, kidnapping and criminal association.
Two of the material authors of the robberies have entered prison by court order, while efforts continue to try to locate a sixth member of the criminal group, also believed to be the material author of a robbery in Murcia, pending arrest, as reported by 101tv.es.