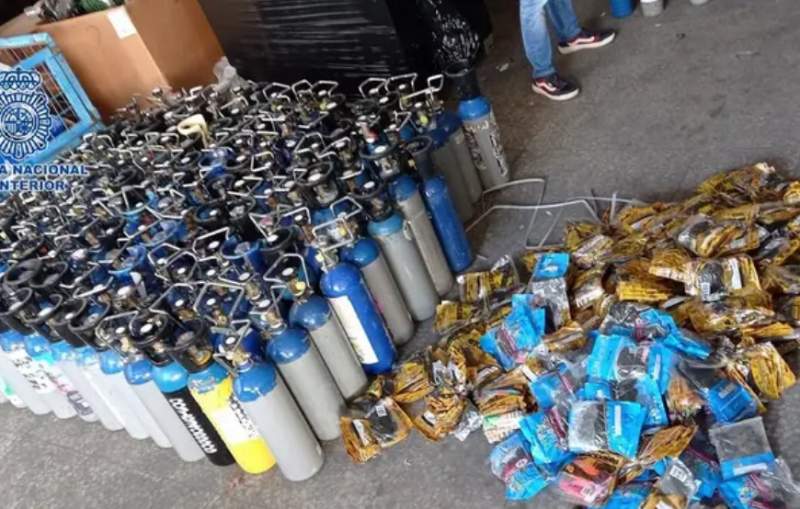 800 bottles of laughing gas have been confiscated in the province of Malaga, with four arrests

Officers from the National Police have confiscated 800 bottles of nitrous oxide – better known as laughing gas – in the Malaga municipalities of Marbella and Mijas. As a result, four individuals have been arrested on suspicion of allegedly belonging to a criminal organisation, and crimes against public health.
The network had two industrial warehouses that they used to store the merchandise, from which they distributed the bottles to be consumed at private parties along the Costa del Sol. ‘Operation Balloon’ concluded with several searches, and the intervention of said bottles, along with two vans, and €3,550 in cash.
Udyco officers stationed at Fuengirola Police Station had initially launched their investigation after believing narcotic substances were being trafficked from an industrial warehouse in the La Ermita industrial estate in Marbella.
Surveillance confirmed the strange movement of vehicles around the warehouse by several people, who, upon entering, immediately closed the gates. Several members of the organisation were subsequently identified, and their places of residence were located in Marbella.
As reported by the National Police in a statement, upon observing the suspects entering a warehouse in the La Vega industrial estate in Mijas Costa, and given the strong suspicion of an imminent transaction, officers decided to intercept the occupants of a car at the exit of the industrial warehouse.
A search of ​​the vehicle uncovered 204 nitrous oxide cylinders, and the four suspects were promptly arrested. As part of the same investigation, officers seized another 596 bottles of the gas. Those arrested and the proceedings carried out were placed at the disposal of the Investigating Court No4 of Fuengirola, as reported by larazon.es.