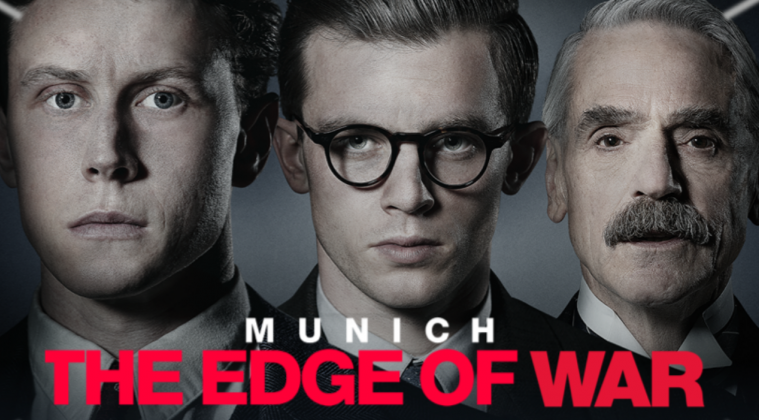 Munich: The Edge of War tells a fictional story of two university friends as Europe stands on the brink of World War Two in 1938.

This historical thriller, adapted from Robert Harris’ 2017 novel, depicts British Prime Minister Neville Chamberlain’s desperate attempts to negotiate with Adolf Hitler to avoid war. This movie has an 84 per cent critic rating and a 79 per cent audience rating on Rotten Tomatoes, however, it struggled to keep me gripped throughout.

The movie begins at Oxford University in 1932, where we are introduced to best friends Hugh, played by George MacKay (1917), the enthusiastically pro-Nazi German Paul, and Paul’s girlfriend Lena – who is later found to be Jewish and ends up bed-ridden after being captured by Nazi’s.

Six years later, when Germany and the rest of Europe are on the brink of war, Hugh is now a private secretary to Neville Chamberlain, played by Jeremy Irons (Lolita), and Paul is now a diplomat who has become opposed to Hitler’s rising. Paul receives a secret document from his lover and becomes involved in a clandestine plot to arrest the Fuhrer, enlisting Hugh to help.

Tensions mount as one of Paul’s old friends who is now one of Hitler’s bodyguards, played by the amazing August Diehl (who also played another terrifying Nazi in Inglorious Basterds), becomes increasingly suspicious of him.

If you’re a fan of films like Tinker Taylor Soldier Spy you’ll most likely enjoy this espionage movie but, unfortunately, at two hours long it failed to keep me gripped throughout despite some tense moments. Although we know how history panned out, I felt the moments with the greatest tension were in the last third of this film.

However, it is successful in portraying the frightening rise of Nazi Germany and secrecy amongst those who wanted to take down the regime.

Munich: The Edge of War became available to stream on Netflix on January 21, 2022.