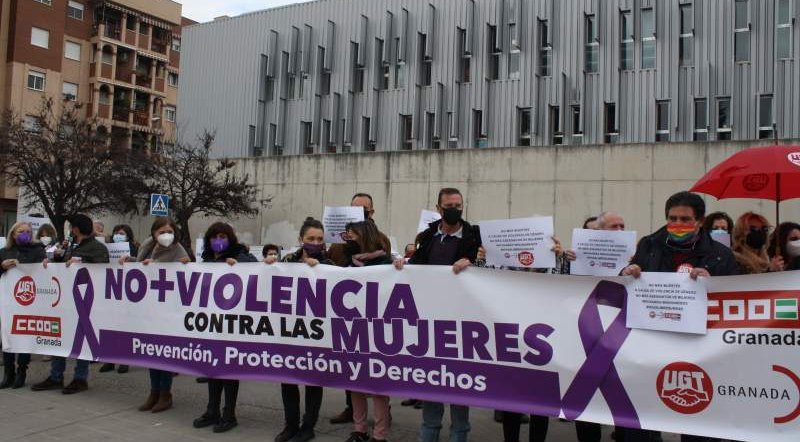 Granada unites to remember the woman who was found dead in her bakery on January 25, the victim of alleged gender violence.

RESIDENTS of Granada gathered on Wednesday, January 26 to remember the woman who was found dead in her bakery on January 25, the victim of alleged gender violence.
Administrations, unions, feminist associations and residents from the municipalities of the Granada province gathered as a sign of mourning for the death of Mónica, the resident of Fuentes de Cesna, district of Algarinejo, who was alleged to have been murdered by her husband in what Spain calls “gender violence”.
Friends and neighbours of Mónica, the 50-year-old woman, who became the second victim of gender-based violence in the country in 2022, gathered as a sign of condemnation and to honour her memory.
The Mayor of Granada, Francisco Cuenca, also attended the event and called for unity against such crimes.
“[Today] we show absolute revulsion at a new case of gender violence. Obviously, a sexist crime that embarrasses us as a country, as a society; that embarrasses all of us who believe that a city cannot be fair or advanced as long as there is no effective and real equality,” he said.
“We must fight against gender violence that shames all of society and we should not allow even one to go unpunished,” added Francisco Cuenca.
The dead body of Mónica was found in her bakery in the village of Fuentes de Cesna which she ran with her husband, 48, who was also found dead. According to Nius newspaper, the victims were found in a pool of blood both with a shot to the head and Guardia Civil officers noted it could have been the result of a murder-suicide.
Mónica’s body was found at around 6 am this morning by an employee of the bakery who alerted the emergency services. Later, her husband’s lifeless body was found in the same building. Police believe the man may have killed his wife and then taken his own life.
Condemning the acts, the Government Delegation against Gender Violence took to Twitter on January 25 to publish collected data revealing the number of women murdered in alleged gender violence cases. Mónica is believed to be the second woman killed by gender violence in 2022 and 1,128 since 2003.
Spanish President Pedro Sánchez tweeted about the tragic events, writing: “Words fail to convey all the pain that each sexist crime makes us feel. We must stop gender violence. We will not stop until we achieve the end of it.
“My hug to the loved ones of the woman murdered today in Granada.”