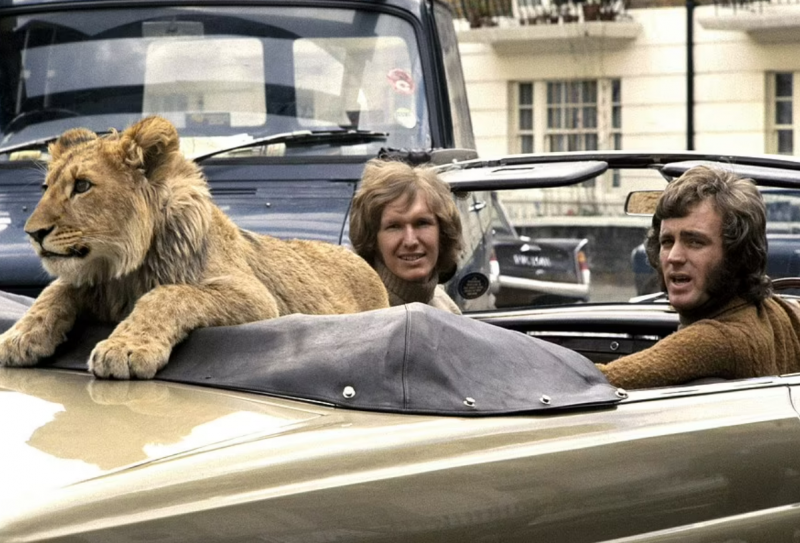 The socialite who bought a lion in Harrods in the 1960s and famously walked it around West London before setting it free in Kenya has died.

Socialite John Rendell who was known for buying a lion from the pet department of Harrods and taking it on walks around London in the 1960s has died aged 76.
The Chelsea-based Australian became famous after he and his friend Anthony ‘Ace’ Bourke bought a lion cub from the department store in Knightsbridge.

Rendell and his lion, Christian, were a regular sight around Chelsea with the conservationist and Mr Bourke also being spotted driving the big cat around in their Mercedes cabriolet.
Christian was famously taken to glamorous parties and restaurants before being returned to the wild in Kenya in 1970.
An incredible video of Christian and Mr Rendell being reunited, with Christian even recognising his former master and hugging him, has attracted more than 100million views on YouTube.

Me Rendell was sadly found dead at his desk on Sunday, January 23, by his son.
Writing in the Daily Mail in 2013, Mr Rendall said of purchasing Christian: “We had the crazy idea that if we bought him, we could offer him something better than his life at a department store, even if it were only for a few months.”
They took him back to their flat on King’s Road where he lived with them for a year “growing rapidly and costing us a fortune in food.”
The big cat was released into the wild in Kenya in 1970 and one year later Mr Rendall and Mr Bourke flew back to the country in the hope of meeting Christian again.
The video of the reunion was rediscovered in 2008 and posted to YouTube where Christian is seen bounding over to Mr Rendell and hugging him.
Speaking about the video, Mr Rendall said: “Adults seem to find it very difficult to watch without crying. It summons up all the pain of separation and loss, and the joy of being reunited.”
Mr Rendall spent the rest of his life doing conservation work and regularly returned to Africa, he said: “The journey that Christian took me on when he brought me to Africa has been an extraordinary one. It came as the most wonderful surprise, and it’s something I never get sick of. I never tire of showing people Africa.”