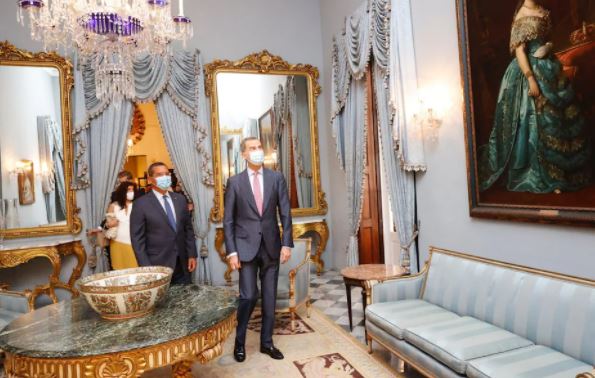 King Felipe has called Puerto Rico is a “model” of colonialism as he lashed out at protesters who tore down a conquistador statue just before he arrived on the island. The Spanish king made the remarks in a speech commemorating the 500th anniversary of the founding of Puerto Rico’s capital.
He praised the conquistadors for bringing European civilisation and values to the New World. His remarks are in stark contrast to the ones made by Prince Charles, who denounced the “atrocity of slavery” when Barbados removed the Queen as head of state in November.
In response to the visit by the Spanish king, protestors in Puerto Rico attacked “Spanish tyranny” and tore down a statue of Juan Ponce de León, who was an explorer with Columbus when the first wave of ships from Spain reached the island nation.
They hit back at the Spanish empire which tore through the indigenous community of the island, who died in their thousands due to imported disease and forced labour. “The king’s presence here is non grata. It validates many crimes against humanity that happened here,” said Jorge García Muñiz at a street protest in San Juan.
A day later King Felipe said that Puerto Ricans and all Hispanic communities in the Americas should feel “proud of our shared past, of those values Spain provided back then and which are still valid today”.
There was no apology offered by the Spanish king in his speech, nor did he give recognition to the suffering of the indigenous Taino people. Instead, he said the country was a “model of colonialism” and Spanish expansion in the Americas, as reported by The Telegraph. He argued that Spanish colonisation had brought “government institutions, the building of universities, schools, hospitals and printing presses”.
“Spain brought with it its language, its culture, its creed, and with all this, it contributed values and principles such as the foundations of international law or the conception of universal human rights,” he said.
The speech was King Felipe’s strongest defence yet of Spanish colonialism, as leaders of Latin American countries and indigenous communities increasingly seek apologies or reparations from Madrid.
In 2019, Andrés Manuel López Obrador, the Mexican president, wrote to King Felipe asking for the Spanish monarch to apologise for the “massacres and oppression” of Mexico’s indigenous communities.
King Felipe said nothing and left it to Spain’s government to issue a reply that rejected the Mexican leader’s interpretation of the conquest of Mexico.
“The arrival of Spaniards in what are now Mexican lands 500 years ago cannot be judged in the light of contemporary thinking,” the Spanish government said.
“Our peoples have always been able to interpret our shared past without anger and with a constructive perspective.”