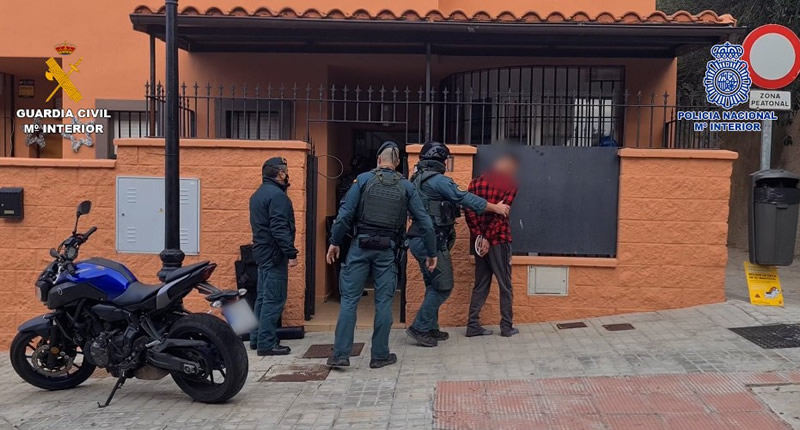 As reported today, Thursday, January 27, in a joint statement from the Guardia Civil and the National Police, their efforts have dismantled an international gang in Andalucia that was dedicated to transporting drugs to Belgium. The product was transported using non-stop, high-speed vehicles, without refuelling.
However, after some of the car shipments were intercepted, the defendants began to use lorries, where they concealed the drugs among legal merchandise. In the police operation, 23 people were subsequently arrested, and 13 house searches were carried out.
Eleven of these searches took place in the province of Seville, and two more in Malaga province. During the searches, officers seized 475 marijuana plants, 725 kilos of hashish, more than €8,300 in cash. Three vehicles, various weapons, and ammunition were also confiscated.
Although it also had branches in Jaen and Malaga, the dismantled group, consisting of Spanish and Belgian nationals, was controlled from the city of Sevilla. They were supplied by local dealers who grew their own marijuana crops.
Investigators began their work at the start of 2020, when Belgian authorities informed the Spanish police of the activities of this network in Spain. Once the investigations began, the officers quickly verified that the members of this drug-trafficking group were established in the provinces of Jaen and Malaga.
Moving the drugs to Belgium was carried out using the ‘go-fast’ method, for which they had purchased a car rental company, the sole purpose of which was to provide the necessary vehicles to move the product.
After police interventions saw their cars being caught, the change to using lorries was also short-lived. Two shipments were known to have been made using the new method of transport, the final one in January 2021. This is when the owner and driver of the lorry were arrested, both Spanish.
A Moroccan national who owned the transport company was also arrested, on suspicion of organising the drug shipments. Two other people were also simultaneously arrested in Barcelona and Sevilla. At the same time, the corresponding operation in Belgium resulted in the arrest of 24 people, both there and in France, as reported by sevilla.abc.es.