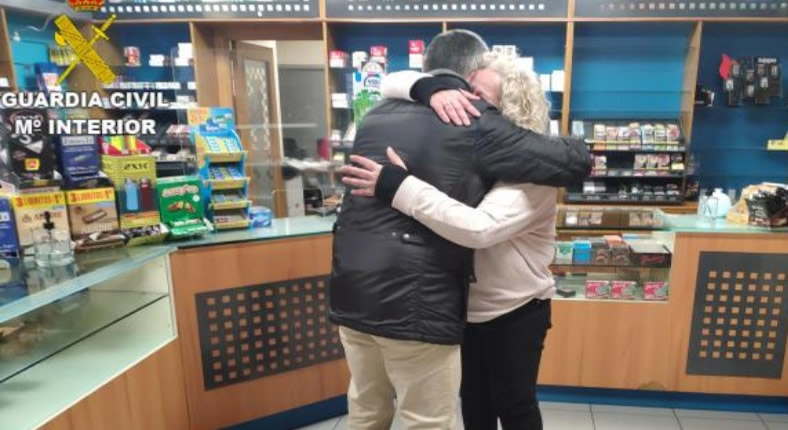 An off-duty Guardia Civil officer was a hero this Thursday, January 27, after foiling an attempted robbery in a tobacconist at around 7:10pm, in the Valencian city of Gandia. Two suspected thieves, armed with knives, were arrested at the scene as a result of his intervention.

As reported in a police statement, the officer was faced with a tricky situation when he observed two young men put on ski masks, draw knives, and run inside the tobacconist’s. Without hesitation, he called 091 to alert the National Police.
Without even hanging up his call, the brave officer rushed into the shop, pulled out his private firearm, and confronted the two robbers. At the moment he entered the store, he verified that both men were on the other side of the counter.
One of them was threatening the cashier in an adjoining room, while the other was rummaging through the cash register. Fearing that the woman would be injured, the officer pointed his personal handgun at the robbers and shouted “stop, Guardia Civil”.

He produced his identification card, while standing in the middle of the entrance to prevent the robbers from escaping. The officer then ordered the men on several occasions to put their weapons on the ground, and to lie down,

Not only did they ignore him, they even took the cash register, and both, armed with their knives, approached the agent. According to the Guardia Civil, he was forced to fire a warning shot at the ceiling, without anyone being injured.

After this, the officer once again ordered the thieves to drop their weapons and get on the floor. This time, the perpetrators complied. and the officer was able to arrest them both.

Moments later, the National Police arrived, and they took charge of the transfer of the detainees. The proceedings have been delivered to the Court of First Instance and Instruction No3 of Gandia, as reported by 20minutos.es.