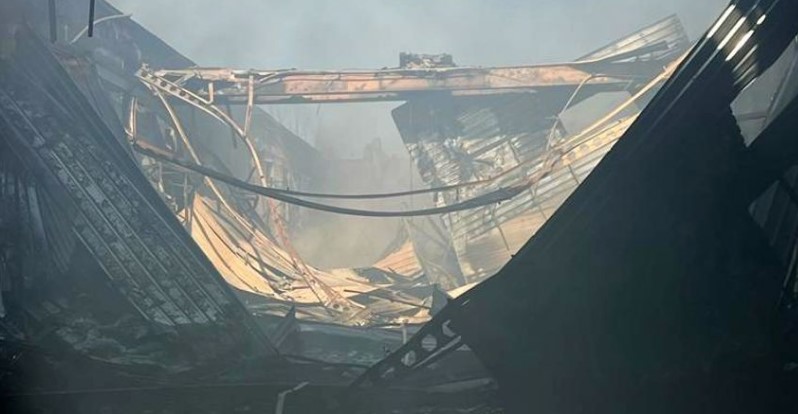 A huge fire broke out in an industrial complex of eight warehouses on the Manises industrial estate in Valencia today, Friday, January 28. This batch of warehouses, located on Avenida Mas de l’Oli, next to the airport, is dedicated mainly to the importation and storage of products for Chinese bazaars.

One warehouse was completely destroyed, but thanks to the rapid action of employees, it did not spread to the neighbouring facilities. Thick smoke from the blaze, and a wall that collapsed, even caused the temporary closure of the Ferrocarrils de the Generalitat Valenciana (FGV) railway line,which runs nearby.

The incident occurred at around 9:30am, in a warehouse said to belong to a Chinese businessman who is considered the largest importer of Asian products in the Valencian Community. Reliable sources informed laopiniondemalaga.es that the first hypotheses suggest that the origin of the fire was a spark from some nearby metalwork that was being welded.

Nico, one of the employees, told how they battled the fire, “We have taken the hoses and, without fear, we have thrown water to try to put it out”. Thankfully, no injuries were reported, and the Guardia Civil is conducting an investigation to establish the cause of the blaze.
Other workers from neighbouring warehouses praised the job done in fighting the fire until the firefighters arrived. “Thanks to them, not everything has burned down. The firefighters told us that, if they did not act, then the same would have happened to the other warehouses”.

Such was the intensity of the blaze that it caused the rear wall of the warehouse to collapse directly onto the FGV tracks that run parallel. The track remained closed until the rubble was removed.

According to sources from the Provincial Firefighters Consortium, seven crews of firefighters were deployed to the scene of the fire. Several ambulances were also mobilised, but were eventually not needed. Twenty employees were evacuated when the fire broke out, but none were injured or affected by the smoke.

The fire occurred in one of the warehouses belonging to the Cova peanut estate, which some years ago was converted into a  Chinese lobby. Of the 220 warehouses in the industrial estate, 180 are rented by Asian businesses of various kinds: technology, textiles, or products for multi-price stores.