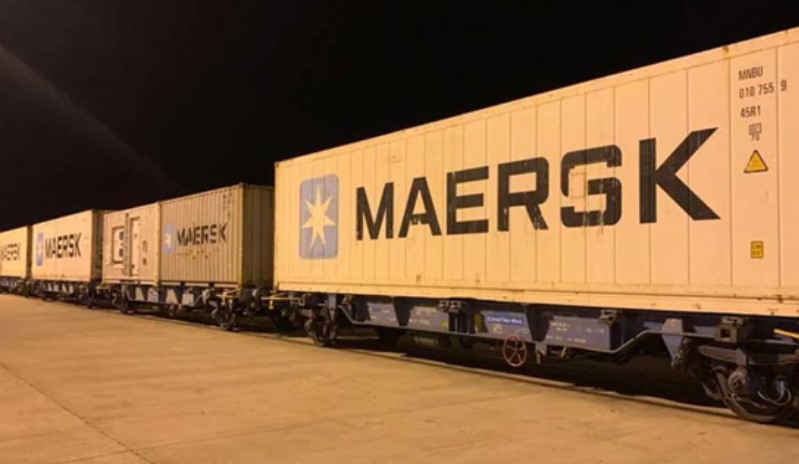 A train loaded with frozen fish will travel between Andalucia and Galicia weekly. The convoy, made up of 21 wagons, with a total length of 290 metres, will take a day and a half to travel the 1,650km that separate the ports of Algeciras in Cadiz, and Marin in Pontevedra.
This will be the first convoy of these characteristics to circulate between Andalucia and Galicia, and the first refrigerated transport to cover the greatest distance in Spain by rail.
Contracted by the logistics company AP Moller-Maersk to Renfe Mercancias, this service will depart every Wednesday night from the port of Algeciras, and arrive at the port of Marin the following Friday, at noon.
A weekly trip is scheduled, with a frequency in each direction. The return from the port of Marin terminal is scheduled for mid-afternoon on Saturdays, although the company hopes to be able to expand this in response to the growing demand for environmentally friendly means of transport.
The first of these trips had been planned to take place last Wednesday 26, but the derailment at noon of a freight train in the province of Sevilla forced the departure to be postponed.
According to AP Moller-Maersk, the purpose of this service is to provide Galician companies with agility, flexibility, and resilience. This convoy will allow cargo to be delivered to Galicia from Algeciras earlier than expected, which will make weekend deliveries and distribution to final retailers possible.
Another advantage, according to its promoters, is that it will reduce the environmental impact in terms of CO2 emissions.
“The carbon footprint of cargo flows is one of the top issues on the agenda for many companies around the world, and Maersk has committed to achieving net-zero emissions for all of its activities by 2040, thereby helping customers to comply with their strategies”, said Diego Perdones Montero, general manager of Maersk for Southwest Europe, and the Maghreb.

A spokesperson for Grupo Iberica de Congelados SA, commented, “One of the main benefits for us is the possibility of transporting our refrigerated cargo by rail for the first time. The railway is one of the most environmentally friendly transport routes for goods, and we are glad to have this transport option, thanks to our collaboration with Maersk”.
Renfe Mercancias highlights that it is thus adding a new service for a client who has opted for the railway as a means of transport to reduce its carbon footprint “to gain speed and reliability, taking advantage of the intermodality of port terminals”.
This ‘reefer’ train – as it is called in the sector – is equipped with two generators, one in use throughout the journey, and the second one ready to start up, in case the first fails.
The wagons receive power from this generator through a wiring system that runs through the entire train, thus ensuring uniform and constant cooling, that guarantees the transport of goods in optimal condition, as reported by sevilla.abc.es.