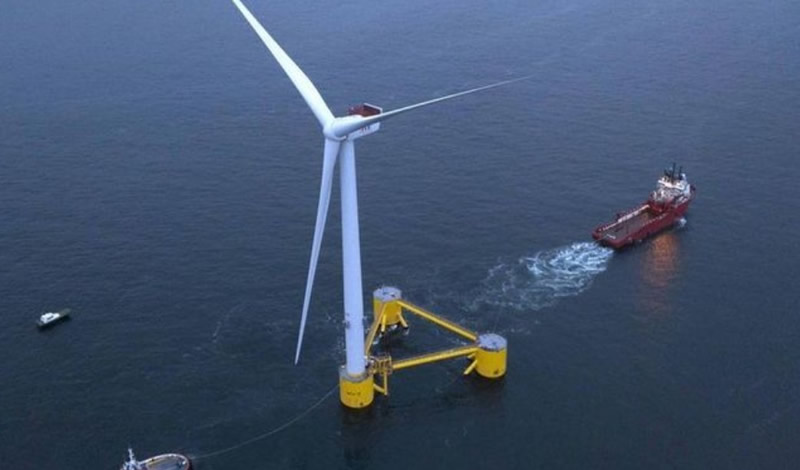 Largest floating wind farm in Spain to be created off the coast of Galicia. image: faro de vigo

Galicia will be home to Spain’s largest floating wind farm, providing around 30% of the community’s energy

A floating wind farm that is being planned 60km from the city of A Coruña, and 30km off the Galician coastline of Artabra, will be the largest in Spain when completed. Its estimated production capacity is 4,800 GWh per year, which will provide approximately 30% of the total electricity consumption of the autonomous community of Galicia.
The Nordes offshore wind farm, which will cover an area of 268 km2, equivalent to seven times the municipal area of A Coruña. The presentation of the project, which worries both local fishermen and ecologists, coincides with the planned dismantling of the As Pontes thermal power station.
Parque Eolico Marino Nordes SL, is the company promoting this project, an entity formed between Bluefloat Energy, and Sener Renewable Investments. The Ministry of the Environment has just received the project, and must now process an environmental evaluation, before it can ever be approved.
In total, the development will comprise 80 turbines and two floating substations. The project states that “the turbines have been positioned with the aim of maximising their production, and taking into account distances that minimize the effect on each other”.
Two different stages are planned in its construcion. The first includes the installation of 35 wind turbines, with an estimated production of approximately 2,100 gigawatt-hours per year. Subsequently, the placement of the other 45 devices is planned, which would extend the park’s annual production to about 4,800 gigawatt-hours per year. A 67km-long submarine cable will transport electricity to the mainland.
According to Carlos Martin, the CEO of BlueFloat, this location has been chosen because “the quality of the wind resource in this region can be considered very good, being one of the areas with the greatest wind power in the country, with an optimal value for wind production” with these installations.
Martin assures that “the proposed area does not overlap with protected natural spaces, it takes into account the location of the fishing grounds, it avoids the special protection areas for birds located on the Artabra coast, as well as the areas with the highest maritime traffic”.
In the event that the wind farm obtains the necessary administrative authorisations, the promoter estimates that the project will create some 14,000 direct jobs during the construction phase, of which, about 6,000 would be in Galicia.
For operation and maintenance, some 240 jobs per year are calculated, with which the total number of direct jobs would rise, considering a useful life of the park of 30 years, that mean up to 21,000 jobs being created, as reported by laopiniondemalaga.es.