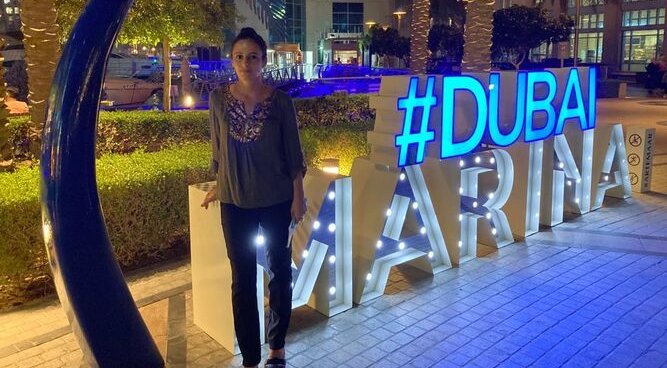 Mercedes Cárdenas, the woman from Malaga who was unlawfully held in Dubai for 65 days with no help from the Spanish government, has finally arrived home.
The nightmare has finally ended. After being forced to stay in Dubai for 65 days, Mercedes Cárdenas, from Malaga, has finally been able to leave the United Arab Emirates. The flight took her to Madrid on Friday, January 28, and from there she travelled to Malaga, where she arrived at 10:30 p.m. She arrived “weighing nine kilos less, with several very serious infections, with a severe psychoemotional imbalance and an inhumane state of post-traumatic shock,” said her partner, José Luis Sánchez, who has spent the past two months trying to get help from the government.
The couple had travelled to Dubai with a 2-year work visa to work on a yacht. There was a trial period of six months during which both the employers and the employees had a right to cancel the agreement. When they reached the boat, where they would also be living, they saw that their conditions were not only precarious but also dangerous, and after two months, they decided to return to Malaga. This was when the problems began.
José Luis was able to board the plane with no problems, but Mercedes was kept at Migration at the airport in Dubai for 14 hours and they would not let her fly to Madrid. The company that had employed her, which they reported for the unsatisfactory conditions on the boat, did not cancel her visa, so when she wanted to leave the country they did not allow it. This led her to be “unlawfully” kept in Dubai for a total of 64 days.
During this time, she was “extremely poor, went hungry, went begging from house to house”, as she had been left with no money in a very expensive city and was not permitted to work. She spent her last 11 days in Dubai on a hunger strike.
All this time, José Luis had sent three letters to King Felipe VI and had called the Royal Household four times to ask for help, but “absolutely nobody from their Cabinet has gotten in touch with us”.
The last message to the King was sent on Saturday, when Mercedes was already in Spain, to inform him of her return and to once more express their “indignation” for the lack of help given by the government authorities and the Ministry of Foreign Affairs.
According to José Luis, the only support came from the regional government of Andalucia and the Malaga City Council. They wished to express their gratitude to Antonio Sanz, Enrique Millo, Francisco de la Torre, Julio Andrade, Elías Bendodo and Juanma Moreno.
________________________________________________________________________
Thank you for taking the time to read this article, do remember to come back and check The Euro Weekly News website for all your up-to-date local and international news stories and remember, you can also follow us on Facebook and Instagram.