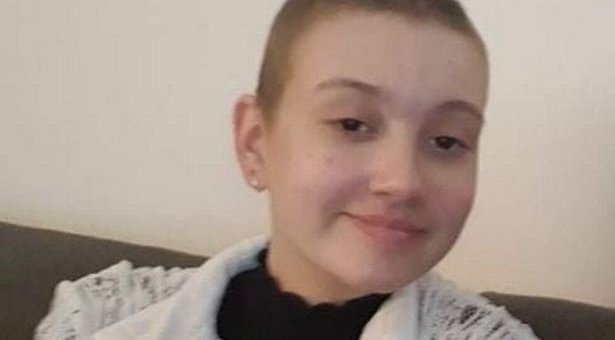 A teenage girl, who complained of pain in her leg left day and night, was told by GPs not to worry and is now battling a rare and aggressive cancer.
Molli Bogar, 17, from Cricklewood, was diagnosed with Osteosarcoma in March 2021. The rare cancer caused a tumour in her leg that left her wheelchair bound and in constant pain.
Molli’s mother, Virginia, who is from Hungary, claims she took her daughter to doctors more than five times after she complained of pain in her right knee. After checking her daughter, she says they told her that Molli was healthy and not to worry.
She said: “I didn’t think it was a big thing but I knew there was something going on and I felt frustrated but I tried to trust them.”
Continuing she said she had a “gut feeling” that something was wrong after Molli first developed symptoms, including a small bump on her head. Molli, who had just started studying Performing Arts at college was forced to pull out after the pain became unbearable.
She was eventually diagnosed with cancer, her mom described the devastating moment they received the news.
“Molli was breaking down and crying, we were in shock, I couldn’t even talk – we didn’t talk, we had to process what happened.
“It was shocking and devastating. I was exhausted and tired, I was lost for a week” she explained.
“I felt like my chest was going to rip apart and my heart was just going to come out” she added after receiving the news on the day after her son’s 11th birthday.”
Molli was admitted to hospital two days later and placed under specialist team at UCLH, by which time her mum says she was already in a wheelchair and had to wear nappies.
Continuing she said: “She was screaming and crying with pain; she didn’t sleep at all.”

The family were in for further heartache when they discovered the seriousness of Molli’s condition, after doctors revealed that the cancer had spread and there were more tumours.
Virginia was told the disease had spread to Molli’s lungs and liver and she had incurable stage 4 cancer. “It was a slap in the face” she said “I had to put a smile on and go back to Molli and say we’re gonna fight it, never give up” she added.
Molli started chemotherapy straight away but CT scan results later revealed 25 more tumours and she was given a slim chance of survival. Virginia was told ‘every minute is just a gift.”
“The doctors were even crying, they said it was so sad- I didn’t process it that time.” she said.
She also described the effect Molli’s illness had on the family and how she has struggled financially on universal credit and disability allowance while caring for her daughter after being forced to give up her job as an assistant general manager in a restaurant.
Virginia, who now works part time as a customer assistant at Lidl, revealed her younger daughter Doren, 14, has been suffering depression following Molli’s diagnosis and has sought counselling.
“It’s hard, one daughter has cancer and one has depression. As soon as I leave the house, and Molly’s side, I get worried, I get anxiety” she said.
“You have a healthy daughter for 16 years and the doctor’s tell you she’s healthy and then one day she’s dying, this is literally what happened.”
Molli is in remission after months of aggressive chemo. Originally told she had maybe six months to live, the young teen is pain free and enjoying seeing her friends, going to Westfield, ChinaTown and Covent Garden.
The family also visited Hungary in August to see relatives. Describing her daughter Virginia said: “She’s such a strong girl, she’s big hearted and very positive, I couldn’t dream about a better girl”
Molli gives me strength, when I know she’s not in pain I can see her smiling, laughing, things normal teenagers do, then I’m happy as soon as she’s not around me I’m not.”
Virginia has set up a GoFundme page for Molli with doctors having refused further treatment unless she has further symptoms. That has left the teen’s mum worried that she will once again be battling the rare cancer, saying: “She’s been fighting, why is she not being treated”