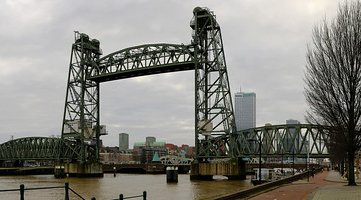 Rotterdam has confirmed it will dismantle a historic bridge to allow a superyacht built for Amazon founder Jeff Bezos to fit through.
The record-breaking luxury yacht is being built by Dutch firm Oceanco and was linked to Jeff Bezos last year. The vessel is reported to be 417ft (127m) long and too tall to fit through the Koningshaven Bridge.
The Mayor’s office confirmed the plans to reporters saying that the bill would be taken care of by Jess Bezos through Oceano. Reports emerged in Dutch media on Tuesday that the middle section of the Dutch city’s bridge, known locally as De Hef, would be temporarily removed to allow the 130ft (40m) high boat owned by Jeff Bezos to sail through.
The move is controversial because the steel bridge has a long history, and is now a national monument. It previously went through a major renovation which saw it out of action from 2014 to 2017, when officials said it would not be dismantled again.
The AFP news agency quoted the mayor’s office as saying the jobs created by the construction of the vessel prompted the plan and pledged the bridge would be rebuilt in its current form. “It’s the only route to the sea,” a mayoral spokesman added.
The sentiment was echoed by Rotterdam’s local authority project leader Marcel Walravens, who said it would not be practical to finish the yacht’s construction elsewhere.
He told the Rijnmond website the project was “very important” from an economic perspective and cited Rotterdam’s reputation as the “maritime capital of Europe”.
“Shipbuilding and activity within that sector are an important pillar of the municipality,” he said.
Details about the luxury custom yacht order being built by Oceanco emerged last year. The firm remains tight-lipped about its clients but a Bloomberg biography about Jeff Bezos in 2021 appeared to confirm rumours that he would be the owner, as reported by BBC News.