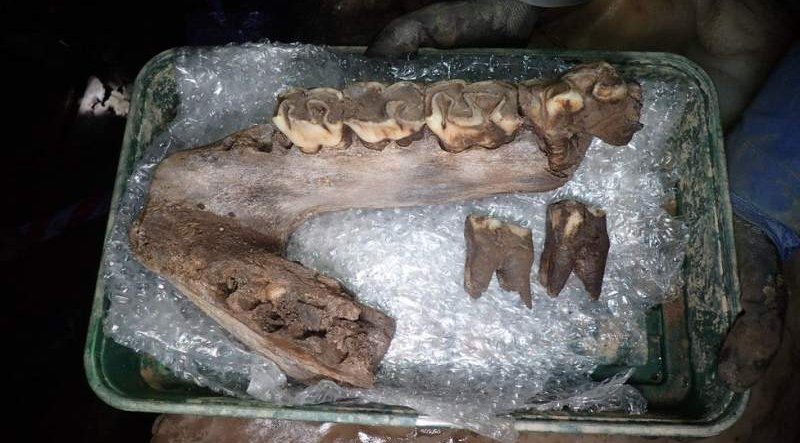 Incredible remains of a woolly mammoth have been discovered among a host of hugely significant Ice Age animal bones in Devon.

Experts have said that the remains of a woolly mammoth and other significant Ice Age bones have been found in a cave in Devon.
The bones found are those of a woolly rhinoceros, wolf and hyena, thought to date back to the last Ice Age – about 30,000 to 60,000 years ago.
The incredible remains were found by archaeologists during work as part of the development of a new town near Plymouth.
Lead archaeologist Rob Bourn, from Orion Heritage, an archaeological and heritage consultancy, said the remains were of “national significance.”
Mr Bourn said it had been “a once in a lifetime experience for those involved.”
A new 5,500-home town being, Sherford, being built in Plymouth saw developers instigate archaeological work at the start of construction in 2015, which has continued ever since.


He said: “Construction happening at Sherford is the sole reason these findings have been discovered and it is remarkable that they have laid undisturbed until now.”
“To find such an array of artefacts untouched for so long is a rare and special occurrence.”
Excavation work led to the discovery of a woolly mammoth and a woolly rhinoceros, along with a virtually complete wolf skeleton and the partial remains of a hyena, horse, reindeer, mountain hare and red fox in an area near old lime kilns and Sherford Quarry.
Academic analysis is now taking place on the bones that are expected to be handed to Plymouth’s new museum, The Box.
No construction will take place on top of the underground area where the remains were discovered, according to the team behind the development of the new town – The Sherford Consortium.
The entrance will be closed, however, making it impossible for the public to access the area safely.
Chief executive of Historic England, Duncan Wilson, said the findings are “exceptional.”
He said: “To have found partial remains of such a range of species here in Devon gives us a brilliant insight into the animals which roamed around Ice Age Britain thousands of years ago, as well as a better understanding of the environment and climate at the time.”