St Valentine a brave bishop who was martyred for his beliefs 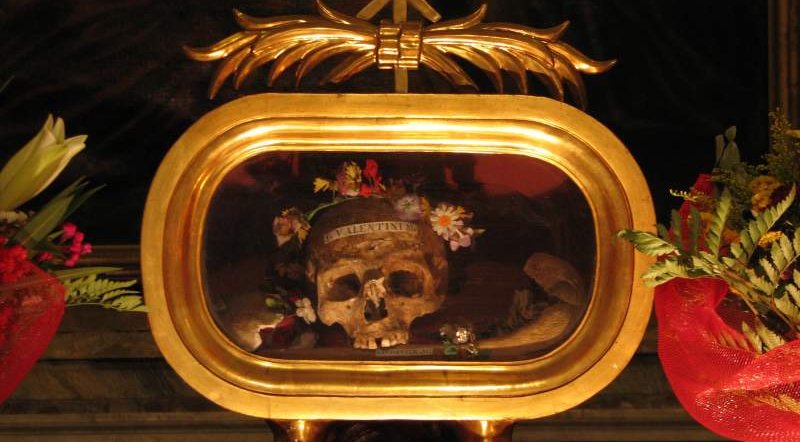 ST VALENTINE a brave bishop who was martyred for his beliefs and is still remembered 1,750 years later by lovers around the world.
THE story of St Valentine is an interesting one which supposedly goes back to the time of the Roman Emperor Claudius II Gothicus who only reigned from 268 to 270 AD.
The Catholic Church recognises a Bishop known as Valentis as St Valentine and it is understood that he opposed a law promulgated by Claudius II which denied the right of marriage to young people as it was believed that single men were more likely to lay down their lives for Rome than married men.
It has to be remembered that at the time, the Roman Empire was almost constantly at war with some tribe or kingdom and Claudius received the added name Gothicus after a major defeat of the Goths.
Valentiis was initially arrested by a Roman Judge named Asterius in the province of Umbria in the centre of Italy but having performed a miracle by curing the judge’s daughter of blindness this led to his release as well as all other Christians who been arrested by the judge.
Bearing in mind that Christianity was still a persecuted religion which defied the concept of not just the Roman gods but also the ability of an emperor to become a deity, a rebellious bishop was unlikely to escape notice for too long.
He was later tracked down and arrested before being taken to Rome where Emperor Claudius called on him to reject Christ or be executed, so according to legend, on February 14, 269 AD he was martyred in Rome and his remains are kept in the Church of Santa Maria in Cosmedin in the Eternal City.
According to a contemporary report it is said that prior to his execution, he wrote to the judge’s daughter and signed it “from your Valentine” and when February 14 was designated his special day in 496 AD, the belief that he should be considered the patron saint of lovers became popular throughout the Western branch of Christianity.
Despite the fact that Britain celebrates St Valentines Day with a vengeance with many cards and gifts there is no record of there being a single St Valentine’s Church in the UK, although there are plenty throughout Europe.
For those who really want to show their partner how much they love them, there are two heart shaped islands in the pacific which offer romantic accommodation all year round, with a special emphasis (and special prices to match) on St Valentine’s Day.
The beautiful Fijian Island of Tavarua is a heart shaped getaway which hosts an all-inclusive surf resort and can arrange for you to be married within a heart shaped ring of stones on the pristine beach of the Island surrounded by palm trees and crystal-clear water.


The larger and not quite so clearly heart shaped island of Moorea in French Polynesia boasts a number of good quality hotels and by next year will hopefully be ready to welcome guests from all over the world again.
Nearer to home there are uninhabited heart shaped islands within Europe and maybe now is the time for a clever developer to take one over and create their own perfect lover’s retreat.
Thank you for reading ‘St Valentine a brave bishop who was martyred for his beliefs’ and remember that all articles produced by Euro Weekly News may be accessed free of charge.