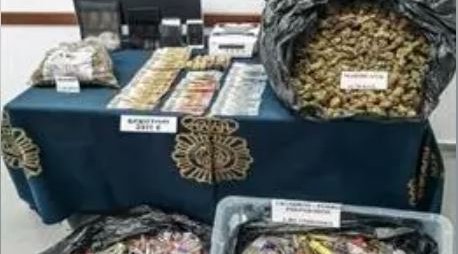 Malaga ‘coffee shop’ busted with two arrests made.
Officers from the Local Police of Marbella and the National Police have busted a “coffee shop” that was believed to be selling drugs in Marbella’s San Pedro Alcántara. Officers have arrested a man and a woman aged 35 and 38 years old. The two people had been allegedly involved in a crime against public health.
When the officers entered and searched the building the two people were discovered to be in charge of the business.
The investigation ended in the seizure of 11 kilograms of marijuana, more than 2,000 euros in cash and 2,300 grams of hashish. 2,407 cannabis joints were also seized according to the National Police.
Officers had initiated an investigation when local residents pointed out that drug use in the central area of San Pedro Alcántara had increased. The officers became suspicious of a “coffee shop” establishment was possibly selling drugs.
Officers monitored the area and made multiple seizures of drugs from some of the “coffee shop’s” regular customers. This confirmed the officers’ suspicions and led to a raid on the property. When the property was entered and searched around 20 people were inside.
The search and seizure operation was authorised by the Juzgado de Instrucción 5 of Marbella on January 25. The officers arrested two people for allegedly being involved in drug trafficking.
Officers from the Marbella Local Police also discovered other alleged administration offences. This included not having an opening licence, not having a complaints book and a lack of civil liability insurance. Tobacco was also being sold from the premises without a vending machine.