Police use tear gas against protesters in Paris 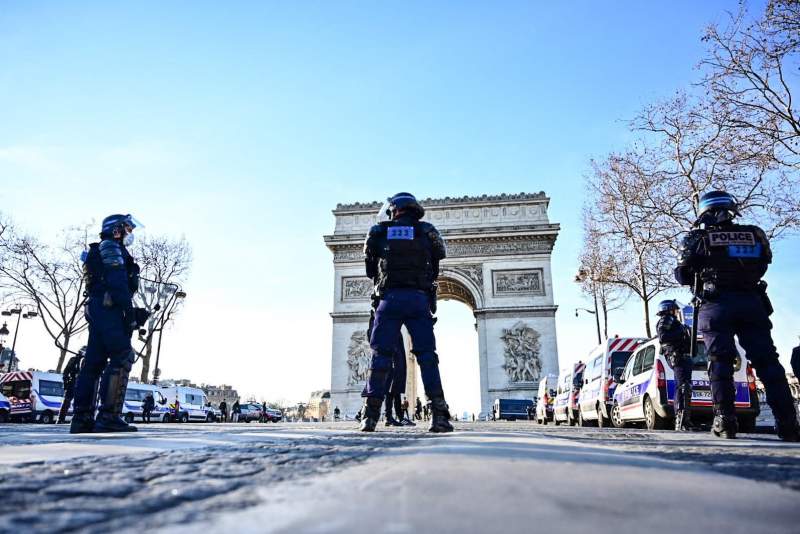 The French police used tear gas against and issued hundreds of fines to break up a group of protesters in Paris who were expressing their discontent with the anti-COVID restrictions and the rising cost of living.
The Paris police fired tear gas and issued hundreds of fines on February 12 to break up a convoy of vehicles attempting to block traffic in a protest against COVID-related restrictions and the rising cost of living.
The protest was inspired by the protest that is currently paralysing the capital of Canada, Ottawa.
Hundreds of vehicles, motorhomes and vans from Lille (north), Strasbourg (east) and Châteaubourg (west) began their journey to Paris on Friday and camped near the city overnight.
The police, who had banned the protest, acted quickly to try to clear the cars from the city entry points and imposed 283 fines against those taking part in an unauthorised demonstration.
However, more than 100 vehicles managed to reach the famous Champs-Elysees Avenue, where police used tear gas to disperse protesters.
Demonstrators were mainly protesting against the vaccination pass required to gain access to many public places, but some also took to the streets to protest against the rising cost of energy and food.
Nearly 7,200 police and gendarmes were deployed, and armoured gendarmerie vehicles were also mobilised on Parisian streets.
The prime minister, Jean Castex, had promised to be uncompromising in the face of the movement. “If they block traffic or try to blockade the capital, we must be very firm,” he stated on television on Friday.
“The timing is important, this is a peaceful thing. We didn’t come here to break anything,” said a man in his 40s at a rally in Fontainebleau, about 70 kilometres from Paris.
Macron called for calm and admitted that there is collective fatigue resulting from the situation that has been going on for two years.
“This fatigue is expressed in different ways: despair in some, depression in others. We see very strong mental suffering, in young and not-so-young people. And sometimes this fatigue translates into anger. I understand and respect that,” Macron said in an interview. “But I call for greater calm,” he added.
________________________________________________________________________
Thank you for taking the time to read this article, do remember to come back and check The Euro Weekly News website for all your up-to-date local and international news stories and remember, you can also follow us on Facebook and Instagram.