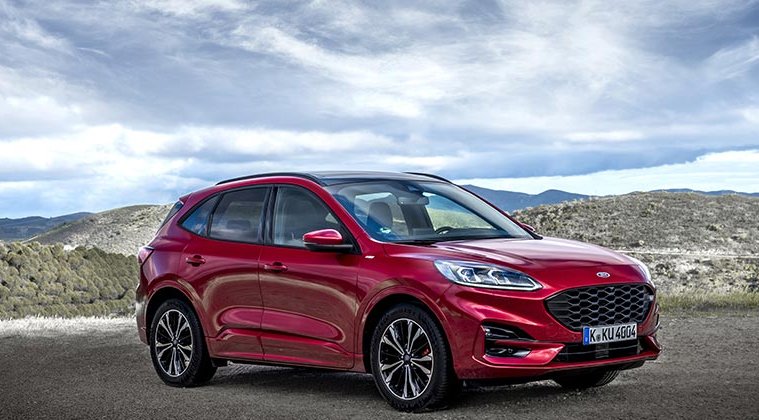 The Kuga has an appealing presence.

WITH ever more new models being launched the demand for SUVs continues. However, it’s easy to forget that some of the long familiar names in SUV world have also been transformed. Ford’s Kuga has been a familiar sight since 2008, indeed before that the Kuga name (spelled Cougar) was attached to a coupe, and you see many older Kugas still looking good.
The very latest Kuga has a refreshingly smart and smooth visual presence compared to many of the overly aggressive looking newer entrants. Think of the Kuga like a grown up Ford Puma, which when I tested it had many people thinking it had stylistic echoes of Porsche’s Cayenne.
Praise indeed! Prices for the Kuga start from €33,533/£27,895 with standard equipment including sliding rear seats, navigation, Car Play and Android auto plus powered and heated door mirrors, front and rear parking sensors, air conditioning, cruise, rear privacy glass and a heated windscreen.
The two engine options are a 1.5-litre EcoBoost with six-speed manual gearbox or, the pick of the duo in my book, a 2.5-litre petrol hybrid with CVT automatic transmission. You can have either a self-charging or plug-in hybrid with 190 PS and 225 PS respectively.
In plug-in mode the Kuga will cover around 30-35 miles (in the real world) on pure electric, the full hybrid can utilise electric power automatically, such as at low speed, and assist the petrol engine to avoid using excessive combustion power.
An ST-Line X Edition was my test model and priced at €45,686/£38,005, in addition to that hybrid power it gains significantly more standard equipment such as LED lights, hands-free powered tailgate, parking camera, climate control, keyless entry and start along with subtle styling adornments including red brake calipers.
On the road the Kuga is as smooth as its flowing lines, and unless pushed hard the CVT gearbox doesn’t cause much of an audible ruffle – it is a trait of these boxes to raise the revs thereby increasing cabin noise  – and changes smoothly. For a large SUV the Kuga handles well despite its taller stance and weighty battery pack, thanks to a comfortably stiffened sports suspension and excellent steering feel.
Inside there is rather more ‘scratchy’ hard plastic than one would like, but a welcome presence of buttons and a logical layout with clear displays are big plus points. The driving ‘feel’ just adds further to the Kuga’s already appealing presence.