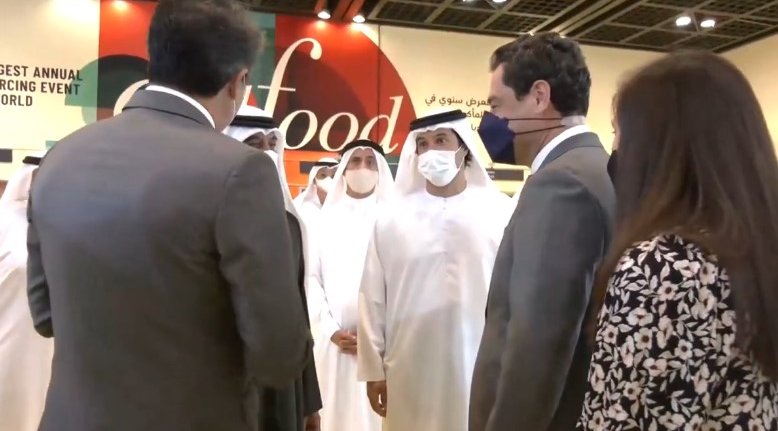 Juanma Moreno, the President of Andalucia, was on the third and final day of his visit to Dubai today, Sunday, February 13. He met with Ahmed Bin Saeed Al Maktoum, president of the Emirates airline company, to discuss the possibility of a direct air link between Dubai and Andalucia, specifically, Malaga airport.
They held their meeting whilst attending the opening of the Gulfood International Food and Beverage Fair, in which the Andalucian Government is represented by Extenda. In total, 39 Andalucian companies have a presence there to promote and sell their products.
Speaking to journalists during Gulfood, Moreno explained that he had been “lucky” to personally convey to the president of Emirates, his interest in Andalucia having a “direct link” with Dubai.
He added that the president of the company responded to him that he is already working on this. Moreno pointed out that the Andalucian producers and entrepreneurs who have businesses in Dubai, and have to transport their products to this city, have told him that they miss a direct connection.
Tourism from the United Arab Emirates is of “high quality”, and is interested in reaching Andalucia, explained the president. He assured that one of the “great objectives” is to open that direct route between Dubai and the autonomous community.
According to data from the Junta de Andalucia, between 50 and 60 per cent of the tourism that Spain receives from citizens from Dubai is concentrated in the province of Malaga. At the moment, there is a direct connection in summer, between Malaga and Abu Dhabi, with the Etihad airline, as reported by sevilla.abc.es.