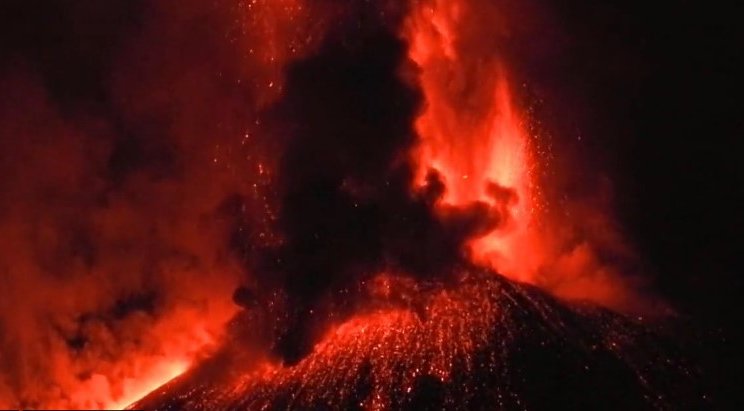 The latest eruption by the Mount Etna volcano has been spectacular, including a lighting display

The Mount Etna volcano has erupted in a powerful way, creating a very unusual volcanic storm, which has even produced lightning in the sky over the island of Sicily.

It is in a full paroxysmal phase, shooting lava fountains 500 to 600 metres tall into the atmosphere. Lava flows are spewing out to the southwest and southeast, and the eruption column of smoke is several kilometres high.

Italy’s National Institute of Geophysics and Volcanology clarified that these types of volcanic storms are rare, but can occur in particularly violent eruptions, or with volcanoes located near the sea.

For example, the recent eruption of the Tonga volcano produced about a hundred lightning strikes per minute. In contrast, none were seen at the Cumbre Vieja on the island of La Palma in the Canary Islands.

Boris Behnke, a renowned volcanologist, informed The Associated Press that these volcanic rays could be observed during 2021, in 2013, and also in 2015. Fortunately, the eruption, which began shortly before midnight on Thursday 10, did not cause any damage. However, it did spew ash more than 10 kilometres above sea level.

The main difficulties derived from the frequent eruptions of Etna have their origin in the column of smoke, formed mainly of ashes. These remains can affect the health of the inhabitants, disrupt air traffic, and damage crops, even tens of kilometres from the crater if the winds are not favourable.

Etna is one of the most active volcanoes in Europe, although its effects on the population are usually no more than a shower of ash and plumes of smoke. Rosa Anna Corsaro, a researcher at the INGV, has experienced some sixty eruptions since the beginning of 2021, as reported by lavanguardia.com.