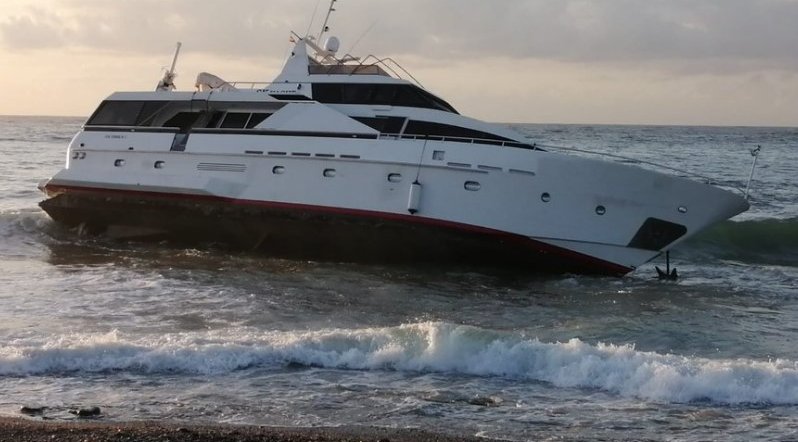 A megayacht that ran aground last Wednesday, February 9, on the shore of Carchuna beach in the Granada municipality of Motril appears to have been abandoned. Its owner seems to have chosen to disappear and leave the vessel to its fate.

The stunning Neeveen yacht originally belonged to Mohamed Ashmawi, the Saudi businessman, one of the great Arab sheiks who chose Marbella as one of his favourite residences in 1981. Ashmawi named the boat after his daughter, and it was docked for many years in the exclusive Puerto Banus marina in the city of Marbella.

At one point, the Neeveen was the epicentre for jet set parties in Marbella, attended by some of the most famous people in the world. The sheikh passed away in May 2019, but he would surely have never expected his luxury vessel to end up abandoned on a beach in Granada.

A Frenchmanbought the boat last October in Puerto Banus, reportedly for approximately €400,000. The crew were allegedly taking the yacht on a test trip to Aguadulce when an engine room failure made them divert to the coast. After suffering damage, it ran aground on the beach, with its crew ‘trapped’ for five hours.

They were finally freed after the efforts of firefighters, and members of the Maritime Rescue, National Police, Guardia Civil Maritime Service. The boat’s owner was given 24 hours to prepare a salvage plan, and at his request, the Marina Motril company began to prepare it.
However, when the Captaincy went to his hotel to notify him that he was losing the rights to the ship for not presenting the plan, he was gone. Salvamento Maritimo, with a team from Cartagena, began last Friday 11 to decontaminate the ship, and extract its fuel to avoid environmental risks.
The Neeveen will subsequently be taken back to Motril port, where, depending on its condition, will be put up for auction, or even sent to be scrapped, as reported by diariosur.es.