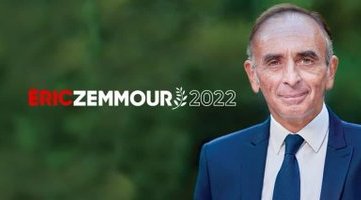 French presidential hopeful Eric Zemmour has according to his campaign manager, spoken with former US President Donald Trump on Monday in a call in which Trump apparently said he backs him.
Guillaume Peltier, the Vice-Chairman of Zemmour’s ‘Reconquete’ movement, told France 2 television on Tuesday that the call took place late on Monday evening and lasted “around 40 minutes.”  He added that: “Donald Trump told Eric Zemmour not to give in, hold firm, stay courageous,” saying that contending with the media can be harsh on outsider candidates.
The call came following requests from Zemmour’s office for Trump to show his support, which he agreed to do however when it was deemed difficult for Zemmour to travel to Florida to meet the former president it was agreed they should talk by phone.
Repeating one of his mantras Trump reportedly told Zemmour: “To win, never change your line. Don’t give in.”

Zemmour is a far-right anti-establishment figure that has spoken openly about his opposition to immigration and to Islam, drawing comparisons with the former US leader and leading him to be dubbed “Le Trump.”
Convicted several times for inciting racial hatred, the Paris-born polemicist of Algerian-Jewish descent espouses a nativist agenda that some experts suggesting Trump’s 2016 campaign was the blueprint for.
Amongst his proposals is a ban on foreign-sounding names, including Mohammed. He has also touted a conspiracy known as the Grand Remplacement (Great Replacement) theory, which claims complicit forces are attempting to repopulate France with Africans.
It is unlikely that as Trump backs the far-right French presidential hopeful it will have any impact on his support or the outcome of the upcoming elections, with both he and Trump considered divisive figures.
Thank you for taking the time to read this article, do remember to come back and check The Euro Weekly News website for all your up-to-date local and international news stories and remember, you can also follow us on Facebook and Instagram.