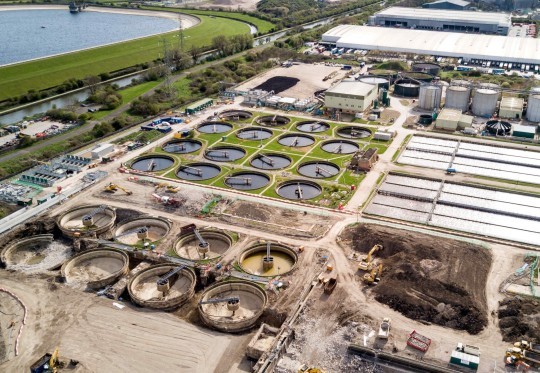 Local water company Thames Water is being investigated after more than two billion litres of raw sewage was pumped into the river Thames over a period of two days in 2020. Released by the Mogden wastewater treatment works, in Isleworth west London, the equivalent of 400 Olympic size swimming pools of untreated waste was poured into the Thames on October 3 and 4, 2020.
An Environment Agency spokesperson said: “Water quality in the River Thames in London has improved significantly in recent years since the Lee Tunnel has been operating and Thames Water invested in upgrading five sewage treatment works including Mogden.
“However, our routine compliance monitoring activities have flagged the need for further investigations into operations at the Mogden site.
“Water companies are required to provide a record of sewage discharged into our waterways and have a legal duty to avoid pollution.
“They must act quickly to reduce any damage that happens as a result of their activities.”
Last month’s Water Quality and Rivers Report showed the amount of raw sewage leaking into the Thames has soared in recent years, with around 3.5 billion litres of raw sewage contaminating the river in 2020. That means two-thirds resulted from the two-day spillage.
Sarah Bentley, Chief Executive of Thames Water in a report claimed that Mogden had been “inundated” with extra waste due to heavy rain, saying that: ‘They were the wettest days on record, and we struggled to treat both the permitted amount, but also just struggled to treat the sewage.
“On that day there was enough rainfall to fill Loch Ness.
“In order to deal with that at Mogden, we have eight storm tanks at the moment that currently hold about 40 Olympic-sized swimming pools of storm water contaminated with sewage.
“We would have needed either another treatment works the same size as Mogden treating another 1 billion litres or we would have needed 150 more storm tanks.”
The Environment Agency does allow overflows if sewage networks are likely to be overwhelmed in extreme circumstances, such as storms.
A Thames Water spokesperson said: ‘We regard all discharges of untreated sewage as unacceptable and will work with the government, OFWAT and the Environment Agency to accelerate work to stop them being necessary.
“We have an unprecedented amount of investment directed towards safeguarding our rivers and streams.
“That is why we’ve committed to providing sewage discharge notifications in close to real time from all of our 468 permitted discharge points by the end of 2022 and believe we’re the only water company to have made such a commitment for inland waters.
“Between 2020 and 2025 we are spending £1.25 billion on maintaining and improving our operational sites, including contributing to the health of 745km of rivers across London and the Thames Valley.
“This includes a commitment to invest over £100 million at our Mogden site.
“Our aim will always be to try and do the right thing for our rivers and for the communities who love and value them.
“We have a long way to go – and we certainly can’t do it on our own – but the ambition is clear.”
The case of Thames Water is sadly not unique with the release of raw into British rivers happening more than 1,000 times a day, according to new data collected by The Telegraph. They found that more than a third of these occurred when there was no heavy rain.
Fines have been issued but campaigners say they are not enough, with Thames Water fined £4 million last may for allowing 80 million litres of sewage to flood a local park and Southern Water a record £90 million for dumping up to 21 billion litres of untreated sewage over six years in protected seas off England’s southern coast.
The two billion litres of raw sewage pumped into the river by Thames Water over two days is considered excessive, however the UK Government late last year gave them the green light to continue doing so as the availability of the chemicals needed to treat the effluent became in short supply due to BREXIT.