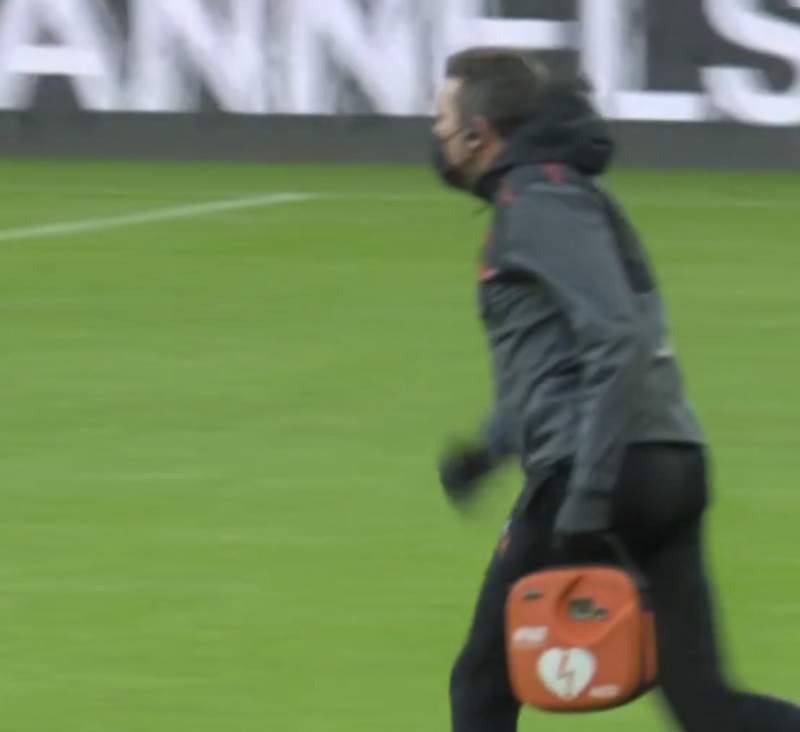 EFL: Another English Football League game was halted last night due to a medical emergency in the stands.

SHOCKING NEWS – Another English Football League (EFL) game was halted last night (February 15) due to a medical emergency in the stands, in what is becoming a worrying trend.
The incident happened during Burton Albion’s home clash against Bolton Wanderers when just after the restart of the second half, medical teams from both clubs ran into the homestand to help a fan.
Burton, who were leading 3-0 at the break, tweeted at the time: “The game has been stopped due to what appears to be a medical emergency in the home end of the crowd.
“Medical staff from both teams are straight in attendance.”
The match was delayed for five minutes before the League One match was able to continue.
The Brewers’ Twitter account wrote on 53 minutes: “The game has now resumed.
“Well done to the medical teams from both clubs for running across the pitch to give emergency attention to the support in question.”
According to the Sun, another game suffered a similar incident, although not in the ground.
Non-League Welling United were playing Dulwich Hamlet in the National League South when a medical emergency happened outside the ground.
A tweet from the club read: “We can unfortunately confirm that a Welling United supporter collapsed outside the ground, however he was taken to hospital and is now stable.
“The club sends thoughts and prayers to the supporter and his family and friends.”
The worrying trend has continued to shock English football.
ANOTHER medical emergency halted a game at St James Park on Sunday, February 13, becoming the second time in as many months that an incident has occurred at Newcastle’s ground.
On February 13, the Magpie’s game against Aston Villa was temporarily halted following a medical emergency in the stands.
Prior to that, the game between Newcastle and Tottenham had to be suspended after an elderly gentleman suffered a heart attack in the stands back in October.
More recently, Fulham fan Paul Parish tragically passed away after suffering a cardiac arrest while in the stands at Craven Cottage on Saturday, January 29.
On that same day, Oldham and Wycombe matches were also suspended due to medical emergencies in stands within minutes of each other.
Similar incidents have sadly happened elsewhere since the beginning of this year’s English football season.
Chelsea’s visit to Vicarage Road was suspended for more than half an hour on Wednesday, December 1 when a fan collapsed after suffering a heart attack. Minutes later, Southampton’s meeting with Leicester City was also suspended as a fan received medical attention in the stands.
On October 17, a Newcastle fan collapsed during his teams Premier League match against Tottenham at St James Park. Medics in the crowd rushed to help Alan George Smith, 80, after he suffered a cardiac arrest.
On November 8, a fan was stretchered out of the stands during Dagenham & Redbridge’s FA Cup clash with Salford City after suffering a fit at Victoria Road.
On October 23, a West Brom supporter collapsed in the West Stand of The Hawthorns during the first half. The man was treated by paramedics and ambulance staff before being placed on a stretcher and taken to hospital.
The second half of the same Championship fixture was also delayed when an away fan fell ill and was taken to hospital.
On September 29, Coventry City’s match at Luton Town was brought to a halt early in the first half after a Sky Blues fan collapsed at the game.
Stewards and paramedics were alerted to the situation and then proceeded to treat the supporter, who was eventually stretchered off to hospital.