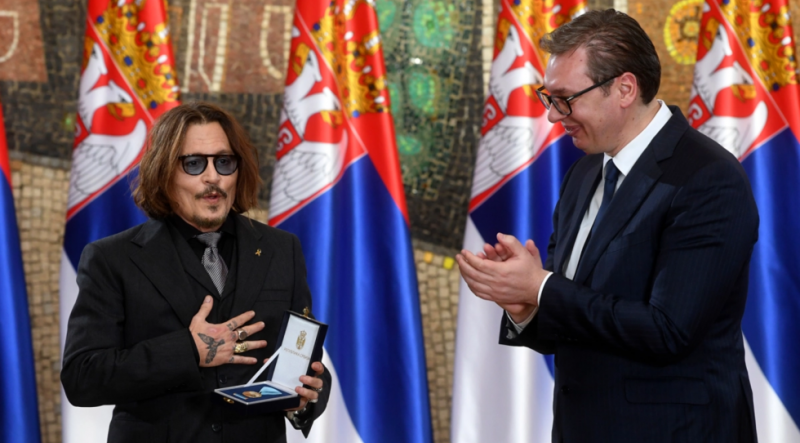 The Pirates of the Caribbean actor, Johnny Depp, was presented the state medal of honour for promoting the country in his films by Serbian President Aleksandar Vucic during a Statehood Day ceremony in Belgrade on Tuesday.
The medal is awarded for “outstanding merits in public and cultural activities, especially in the field of film art and promotion of the Republic of Serbia in the world,” according to Balkan Insight.
Receiving the honour Depp said: “I truly, sincerely thank you, President Vucic, and this medal of merit, if I am given the honour to walk away with this, I thank you for being kind enough to bestow it upon me,”
He added: “I’m right now on the verge of a new life and I like it, I like a re-beginning. And I would love for that beginning to start here.”
Depp has participated in several projects connected to Serbia in recent years, having shot scenes in Belgrade for ‘Minimata’ and voicing a lead character in the animated series ‘Puffins’, which is produced in the country.

"I'm right now on the verge of a new life & I like it…" – Johnny Depp ✨️ pic.twitter.com/ZnuN1PJFWB

Depp, never out of the limelight, was the centre of controversy last year losing his libel case against the UK’s Sun newspaper after it branded him a wife beater. His receipt of a lifetime achievement award also drew a backlash from feminist organisations across the world.
Denying all the allegations Depp has called them a “hoax” designed by his ex Amber Heard, however that has not helped him to retain his popularity in Hollywood losing several roles as a result.
Speaking at Spain’s San Sebastian Film Festival in September, where he received a lifetime achievement award, he said: “It’s so far out of hand now that I can promise you that no one is safe – not one of you, not anyone out that door.
“No one is safe, as long as someone is willing to say one sentence.
He warned: “It takes one sentence, and then there’s no more ground, the carpet has been pulled. It’s not just me that this has happened to. It’s happened to a lot of people… Sadly, at a certain point, they begin to think that it’s normal, or that it’s them, when it’s not.”
With Depp looking to reboot his career and to start a new life, reveiving the state medal of honour may be just what he needs to put his career back on track.